A firearm is an infantry gun designed for a single person to easily carry and use. Many types of firearms exist in the real world and most games in the Ace Combat franchise feature at least one firearm, usually within a cutscene.

A handgun is the smallest of all firearms. Their compact sizes lean towards close-quarters combat rather than long-range shooting. Military personnel, including pilots, are typically issued service pistols for self-defense. The only handguns featured in Ace Combat are semi-automatic pistols.

The Walther PP is a semi-automatic handgun developed by the German arms manufacturer, Carl Walther GmbH. They are popular with European police and were issued to Luftwaffe pilots during World War II.[1]

During the Valahia Crisis, Andre Olivieri owned at least one Walther PPK. He used it to shoot his laptop after watching Nicolae Dumitrescu's televised message, then dumped it into a fish tank.[3]

The Beretta 92F is a popular semi-automatic handgun still being produced and used worldwide. The armed forces of the United States use the 92F as a standard service pistol under the designation "Beretta M9".

The Osean Defense Forces, which bear similarities to the United States military branches, provide Beretta 92Fs as a standard service pistol. Both Kei Nagase and Orson Perrault use them during the Circum-Pacific War: in the former case, to hold Yuktobanian soldiers hostage;[4] in the latter case, firing on Pops, Genette, and Grimm believing them to be traitors.[5]

The SIG Sauer P250 is a semi-automatic pistol made by SIG Sauer. In Ace Combat 7: Skies Unknown, the P250 appears with the marking "XD .50" on the barrel, but the gun bears little resemblance to a Springfield XD.

Osean prison guards at the 444th Air Base carried P250s as sidearms, but it is not known if P250s replaced 92Fs as the Osean service pistol. Ionela A. Shilage pulled a P250 from one of the 444th guards accompanying Avril Mead and Tabloid at the International Space Elevator, using it to destroy a data chip containing her grandfather's flight data.[6]

A long gun is any firearm with a longer barrel than a handgun. Long guns encompass many types of firing actions, cartridges, and ranges. Ace Combat has featured some of these types, including assault rifles, carbines, battle rifles, and submachine guns.

In the 2030s, Yoko Martha Inoue and the human Abyssal Dision were killed by a group of General Resource assassins aiming to conceal the Darkness of Enigma project. The assassins used a time bomb, but were also equipped with unknown futuristic assault rifles.[7]

The HK53 is a compact variant of the HK33 assault rifle.

HK53s are seen in use by Erusean soldiers and military police occupying San Salvacion during the Continental War.[8]

One is seen carried by an Erusean soldier sometime before the liberation of San Salvacion.[9]

The M16 is a standard issue assault rifle used in many worldwide armies, formerly including the United States of America. In the Ace Combat series, the A1 model seems to have been modified with A2 handguards and 40-round magazines rather than the A1's 30-round magazines.

M16 rifles are seen carried by some ISAF troops,[10] and are assumed to be standard issue for the Osean Army; used during both the Belkan War[11] and the Circum-Pacific War. In the latter case, they were used by Sand Island Air Force Base security personnel attempting to prevent Wardog Squadron from escaping the island.[5] They are also seen carried by Aurelian soldiers escorting Leasath POWs towards the end of the Aurelian War.[12]

Arguably one of the most recognizable rifles in video games, the AK-47 is a Soviet-made assault rifle that has seen standard use worldwide.

In one of the more popular examples of assault rifles in Ace Combat, Larry Foulke is seen holding an AK-47 throughout his interviews with Brett Thompson for his documentary, Warriors and the Belkan War.[13]

Leasath soldiers in the Aurelian War[14] and the Valahia during the Valahia Crisis also used AK-47s.[15]

The G3 is a German-developed battle rifle which, although no longer being used by its country of origin, is still used by over 40 countries.

Though never seen, it is mentioned in Entry 02 of "Confession of a Soldier", a series of promotional short stories published prior to the release of Ace Combat Zero: The Belkan War.[16] 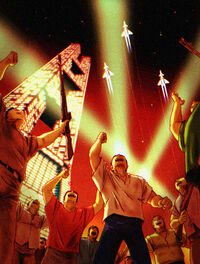 The M1A is a civilian version of the M14 rifle.

The Aurelian Liberation Corps was known to utilize these rifles during the Battle of Griswall.[17]

An Estovakian soldier is seen holding this rifle in an Emmerian newspaper clipping showing The Generals taking power of the country after the Estovakian Civil War ended.[18]

The Type 89 is a Japanese-developed assault rifle used exclusively by Japanese armed forces.

Emmerian partisans used Type 89s during the Emmeria-Estovakia War. One group of partisans held Melissa Herman and Ludmila Tolstaya for a short period of time using these rifles, but one of them jammed when trying to fire.[19] The Type 89 shown in this cutscene is depicted with a .308 magazine, which in reality is incompatible with the rifle.

The G36E is a German-developed assault rifle used by the German Bundeswehr, replacing the G3.

The MP5 is a German-developed submachine gun used most especially by special forces.It is one of the most widely used submachine guns in the world, having been adopted by 40 nations and numerous military, law enforcement, intelligence, and security organizations.

Two Navy SEAL operatives are shown wielding MP5s with retractable stocks in Nomad 61s passenger cabin before the start of a joint operation to interdict SRN cargo ships that were suspected of carrying Trinity weapons.[21]

During the New Russian Federation's occupation of Moscow, one NRF soldier is shown holding a hybrid of the Howa Type 64 and Howa Type 89 rifles. The receiver, pistol grip, trigger guard and magazine are from the Type 64 while the rear sight and handguard are from the Type 89.[22]

The Mk. 18 Mod 1 is a rifle based largely on the AR-15 class of weapons, specifically the Colt M4 carbine.

During the Lighthouse War, Osean prison guards of the 444th Air Base are seen carrying Mk. 18 Mod 1s.[23] They were also used by Avril Mead and Tabloid later in the war.[6][24]