This article is about an in-game mission. For the in-universe event, see Operation Two Pairs.

Help the allies escape and destroy the UAVs.

Trigger
"First Contact" is the seventh campaign mission in Ace Combat 7: Skies Unknown. The player must destroy a series of radar sites and UAVs in Yinshi Valley to help an allied squadron escape through the valley, at which point Mihaly enters the battlefield.

You know, I've received a medal for my ingenuity in finding a use for you cons. But just remember. If you disobey orders, there's a special place in solitary confinement for you. Your so-called right to complain was forfeited the moment you chose to break the law. Okay, then. Go make yourselves useful. An Osean Air Force squadron is currently entering Erusean territory for reconnaissance. Due to certain factors, their return route has been changed. The new return route will be through Yinshi Valley, a scenic and rocky karst area. The enemy's radar facilities and anti-aircraft weapons hidden on the mountainside pose a serious threat. Your mission is to destroy them and get our guys out in one piece, even if it puts your own lives in danger. And it is important to remember they will send up interceptors if you're detected. So you will need to choose something useful in a dogfight. The weather won't be on your side, but you're doing this whether you like it or not. Worry about the squadron's return route, not your own. Your mission is to get them back safely. Which I think is the perfect punishment for your crimes.

The player must destroy all of the SAM sites and radar facilities to help the allies get through. The facilities are defended by AA GUNs and helicopters, and they are located in between many of the rock formations in the area. The mission environment is very cloudy and windy, so the player must fly carefully to avoid crashing into the mountainsides. Off towards the northern edge of the map is a group of thunderclouds; the player must take extra caution if they happen to get hit by lightning since it will temporarily neutralize the HUD and radar, and immediately send the player diving towards the ground. If this happens, the player should quickly level their plane to avoid crashing and use visual guidance to chase UAVs until the HUD and radar are restored. To avoid getting struck in the process of compensating for an overshoot, the player must carefully plan any attacks in the northern area. One potential tactic is to fly above the cloud layer, dive bomb the targets, then fly back up and repeat, but this also requires caution as the low visibility can send the player into the ground or a mountainside as they pull up.

Being out of the cloud layer and away from any major winds, it is recommended that a particular cluster of targets on a hill to the southwest of the center of the area be destroyed first.

The two allied squadrons—Cyclops Squadron and Strider Squadron—arrive in the airspace being chased down by MQ-99 UAVs. The player must defend the allies marked with a large blue box container by shooting down the UAVs chasing them. When a UAV fires upon a particular allied pilot, the radar will ping their location and the pilot will speak up on the radio. The player will fail the mission if any allies are shot down, so the player should prioritize the allies under present attack. Once the player shoots down all UAVs chasing one particular ally, they will break off from the airspace and thank the player; their large blue box container will also disappear, allowing the player to move on to the next ally.

The weather has also worsened; now all clouds are forming lightning.

Once all allies are safely out of the combat area, the mission will advance.

Sol Squadron enters the airspace and begins engaging allied units. Mihaly engages Champ and shoots him down in a dogfight. The player must engage Mihaly around the mountain range.

The mission will be completed once Mihaly has taken enough damage.

You returned without permission and failed as escorts. So how about you rethink your value while in solitary.

Well, well, what do you know. Pilots made it back to base alive. Treat them well and feed them plenty. After all, we have to get a favorable report out of them.

I've spent enough of my time being the commander of some worthless penal unit.

Earning an S Rank on this mission requires earning a combined score and time bonus of 46,350 points or more.

The maximum time bonus available is 40,550 for completing the mission in a total of 12 minutes and 30 seconds or less. This includes time spent retrying from the checkpoint. If the player can complete the mission in that amount of time, they only need 5,450 points from destroying targets in the mission itself to earn the S Rank.

If the player goes past the 12 minutes and 30 seconds threshold, the time bonus decreases by 50 points every second, so the player must compensate by destroying more targets to hit the 46,000 point threshold. 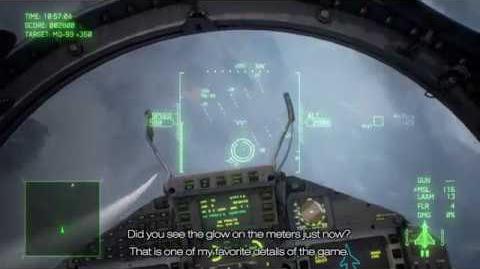 Retrieved from "https://acecombat.fandom.com/wiki/First_Contact?oldid=263159"
Community content is available under CC-BY-SA unless otherwise noted.