View source
watch 02:46
The Quarry - The Loop
Do you like this video?
Play Sound
For the background music during the first part of "Journey Home", titled "Free Flight", see Ace Combat 5: The Unsung War Original Soundtrack. 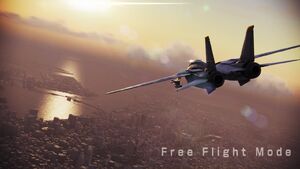 "Fly freely through the skies in any aircraft that you like."
― Sortie description in Ace Combat Infinity

Free Flight (フリーフライト)[1][2] is a gameplay mode that allows the player to fly freely by themselves in any campaign mission area with no enemy forces. The mode debuted in Ace Combat 04: Shattered Skies and has only appeared in most subsequent console games.

Free Flight is available in the following games:

Ace Combat Infinity was the first and only game in the franchise to offer Free Flight as optional paid DLC through the Free Flight Ticket & Bonus Item Set. Notably, the player could fly freely in any Online Co-Op Missions area in addition to the campaign areas.[4]