Free Flight Ticket & Bonus Item Set was a pack of downloadable content for Ace Combat Infinity released in early March 2015. It granted the player access to Free Flight, a gameplay mode that originated from Ace Combat 04: Shattered Skies which allows the player to fly freely in any campaign mission area with no enemy forces.

On January 9, 2018, the pack was removed from the PlayStation Store along with all other DLC for Ace Combat Infinity.

The main item provided in this set was access to the Free Flight gameplay mode.

The "Bonus Item Set" also awarded the player with the "Free Flight Nugget" emblem and the "Sightseeing Flight" nickname. 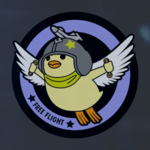 Fly freely in the skies with the Free Flight Ticket!
This item allows you to select and play 'Free Flight' from the Campaign menu. A limited edition emblem and nickname are also included as bonuses in this set!

*This set does not include the game.
*This set can only be purchased one time.

Retrieved from "https://acecombat.fandom.com/wiki/Free_Flight_Ticket_%26_Bonus_Item_Set?oldid=224123"
Community content is available under CC-BY-SA unless otherwise noted.