"I got a feeling you and me are gonna get along just fine. Buddy."
― Larry Foulke to Cipher[1]

The 66th Air Force Unit "Galm", more commonly referred to as Galm Team, was a mercenary fighter squadron employed by the Ustio Air Force's 6th Air Division during the Belkan War. The two-man unit―comprised of a pilot known only by his callsign, "Cipher", and Larry Foulke―was stationed at Valais Air Base.

Over the course of the war, Galm Team shot down a considerable number of the Belkan Air Force's ace squadrons and pilots.[2] The mercenary team's unparalleled combat efficiency proved highly advantageous to the Allied Forces during the war and decisively ended the postwar uprising orchestrated by A World With No Boundaries.

The specific details regarding Galm Team's creation are currently unknown. It is known that Larry Foulke (callsign, "Pixy") was employed by Ustio's foreign mercenary air division as early as 1994.[3] Details concerning Cipher's recruitment remain unknown, though it can be surmised that he and Foulke were not introduced until their first combat sortie,[4] during which they were designated Galm 1 and 2 respectively.[5]

"You'd better have our pay ready and waiting."
― Larry Foulke to UAF command[1]

Galm Team's first known combat sortie occurred on April 2, 1995, when it was dispatched to intercept a Belkan bombing strike on Valais Air Base.[1] Galm's successful defense of Valais ultimately prevented Belka from achieving complete hegemony over Ustio.[6] Nearly two weeks later, Galm Team supported the Allied Forces' counteroffensive preparations by securing a military supply line along Route 171 in northern Sapin.[7] On April 20, Galm Team underwent its first assignment within Area B7R. Although Galm's deployment was only intended to be a diversion to conceal the Allies' mobilization, the two mercenaries shot down all of the Belkan aircraft tasked with defending the airspace, including several ace squadrons.[8]

"I heard there's a few Ustio mercenaries caught up in the mix."
"Yeah, and they're supposed to be good."
― Allied pilots[9]

On April 24, Galm Team participated in the Allies' three-pronged effort to retake the Futuro Canal, dubbed "Offensive Campaign No. 4101". During the engagement, Galm Team inflicted considerable damage to the Belkans' ground and naval forces and successfully escorted the 3rd Osean Naval Fleet through the canal. The considerable sum of money Cipher earned during the campaign caused Pixy to cheekily remark that "drinks [were] on [Cipher]" that evening.[9]

Almost two weeks later, on May 12, Galm supported the Osean Army's successful effort to liberate the town of Solis Ortus[10] outside the Ustian capital, Directus. The following day, May 13, Galm Team took part in the capital's liberation by weakening the occupying Belkan forces' defensive capabilities. Despite Gelb Team's effort to reclaim air superiority, Galm Team shot down the Belkan aces and secured the airspace above the capital. As victory bells rang throughout the city, Pixy reveled in his new-found status as a hero and liberator.[11]

Through the end of May, Galm Team secured a number of decisive victories for the Allies, including breaking the Belkans' defensive Hydrian Line fortifications at Glatisant (May 17);[12] eliminating Belka's second defensive line across the Schayne Plains (May 19);[13] and destroying the powerful chemical-laser weapon Excalibur (May 23).[14] These successive victories propelled the Allies' advance further into South Belka and earned Galm Team a reputation as Ustio's "mercenary dream team".

On May 28, Galm Team was dispatched to Area B7R once again to reinforce the beleaguered Osean Air Defense Force, which had engaged the Belkan defenders. Within minutes of joining the furball, Cipher and Pixy turned the tide of battle in the Allies' favor. Allied radio chatter quickly changed from dire requests for assistance to praise and admiration of Galm's combat abilities. As the aerial battle unfolded, and the Allied pilots witnessed Cipher's unmatched dogfighting skills, they bestowed him with the nickname "Demon Lord of the Round Table". After Galm Team shot down the last enemy ace squadron, the Allies claimed victory in Area B7R, effectively ending the Belkan Air Force's long-standing superiority in the region.[15]

Four days later, on June 1, Galm Team supported an Allied bombing campaign in Hoffnung, a key manufacturing center for the Belkan Army. During the operation, Galm Team provided close air support to the Allied bombers, eliminated the Belkans' anti-aircraft defenses, and inflicted extensive damage to the city's manufacturing facilities. What began as a precision bombing strike, however, quickly devolved into a saturation bombing. The callous nature of the attack on his countrymen left a lasting impression on Foulke, who gradually became more and more disaffected by the Allies' relentless tactics.[16]

On June 6, Galm―accompanied by Crow Team―was dispatched north of the Waldreich Mountains to assist in the Allies' assault on Sudentor. While en route, Foulke's aircraft lagged behind formation. When asked what was wrong, Foulke responded that he was "just sad." Upon receiving a report from AWACS Eagle Eye that Belkan aircraft armed with nuclear weapons had taken off bound for Ustio, Galm and Crow Teams changed course to intercept. Although the mercenaries successfully shot down all of the Belkan bombers, seven nuclear warheads were detonated along the Waldreich Mountains, killing thousands of Belkan civilians.[17]

At 1458hrs, Foulke radioed through the electromagnetic interference and informed Cipher that he had "found a reason to fight"—he then proceeded to open fire on his flight leader. Cipher avoided his missile-fire and became entangled with several Belkan fighters, allowing Foulke to slip away in the confusion. Before departing, Foulke informed Cipher that the two of them must "go our separate ways."[17] With Pixy listed as MIA, Crow Team's number three, Patrick James Beckett (callsign "PJ"), was reassigned to serve as Galm's number two.[18]

One week later, on June 13, Cipher and PJ were dispatched to engage the Belkan remnant forces massing near Mount Schirm. During the operation, Galm spotted an immense, empty hangar at a facility near the mountain, and PJ reported their findings back to Eagle Eye.[18] The following week, Galm flew to Belka's northeast coast of Anfang to eliminate the remaining Belkan resistance forces. Although the operation was a success, the overall strength of the Belkan forces Galm Team encountered led PJ to surmise that they were not part of any remnant resistance movement, and that the "war [was] not over yet."[19]

A World With No Boundaries uprising

On December 25, the terrorist organization A World With No Boundaries used the commandeered XB-0 Hresvelgr gunship to launch surprise attacks on the city of Lumen and Valais Air Base. Despite damage to the base facilities and runway, Galm Team took off in pursuit of the XB-0 and eventually intercepted it over the Waldreich Mountains. The gunship's fighter escorts, which included Espada Team, engaged Galm but were ultimately shot down. Cipher proceeded to disable the XB-0's engines and numerous anti-aircraft weapons, rendering the gunship defenseless. The ultimate destruction of its cockpit caused the XB-0 to lose altitude and crash.[20] Pixy, who had since fallen in with the terrorist group, then relayed a coded transmission to Galm Team, which PJ deciphered: "Yo, Buddy. You still alive?"[21]

Six days later, on December 31, Galm Team was dispatched to Mund Valley in central Belka, where A World With No Boundaries had taken control of the Avalon Dam facility and its V2 warhead. In order to expedite its arrival at the target area, Galm embarked on a course that took it through Area B7R once more. Upon entering the airspace, Cipher and PJ were engaged by several ace squadrons from the terrorist group, including Gault Team, which was led by A World With No Boundaries' (supposed) leader, Anton Kupchenko.[22] After a heated dogfight, Cipher downed the enemy fighters, and Galm continued on towards Mund.[23]

After arriving at the operation airspace, Galm and several other Allied squadrons approached the dam facility at low altitude through the river valley, while other Allied aircraft overhead drew fire from the dam's anti-aircraft defenses. Upon reaching the dam, Cipher flew into the facility's subterranean tunnels and destroyed the three modules controlling the V2 launch.[24] As Cipher and PJ prepared to depart, Pixy―piloting an advanced ADFX-02 Morgan―appeared and opened fire with his fighter's Tactical Laser System, hitting and killing PJ.[25] Pixy then radioed Cipher, asking if he had "found a reason to fight yet"[26] and began to reactivate the V2 launch sequence. The two mercenaries fought over Avalon, with Cipher slowly stripping the Morgan of its weaponry until Foulke activated the aircraft's ECM shielding. However, Cipher landed several hits on the Morgan's forward air intakes,[27] injuring Foulke and forcing him to eject.[28]

Following this final confrontation, Cipher effectively vanished from official records. Foulke is known to have survived his injuries and later returned to service as a soldier for hire in Usea.[28]

AWACS Eagle Eye was the UAF electronic support aircraft that supported Galm Team since its mission over Arlon, Sapin on April 15, 1995.[7] As an AWACS, Eagle Eye provided vital tactical and data analysis for UAF aircraft during combat operations and witnessed many of Galm's decisive engagements during and after the war. 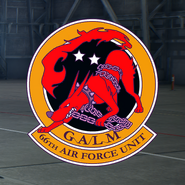 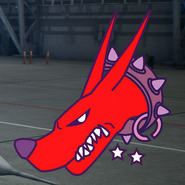 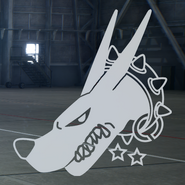 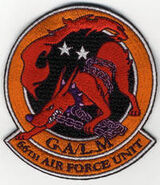 Galm above the Schayne Plains in present-day North Osea

Wallpaper over Valais Air Base

Retrieved from "https://acecombat.fandom.com/wiki/Galm_Team?oldid=254578"
Community content is available under CC-BY-SA unless otherwise noted.