"All planes, focus all fire on Garuda Team. The others aren't worth wasting bullets on."
― Strigon Team pilot[1]

"It's that bird emblem. We've got a chance with those guys watching over us up there!"
― Louis McKnight[12]

During the following battle of the Selumna Peaks, Garuda Team was nearly successful in aiding the Emmerian forces to push through the mountain range. However, the P-1112 Aigaion fired its Nimbus missiles at the Emmerians once more. They began to retreat while Garuda defended them by shooting down all of the Aigaion's UAVs that helped the Nimbus missile tracking system.[13]

Emmeria determined that retaking San Loma would be vital in destroying the Aigaion and its missile system. Garuda Team took part in the liberation of San Loma on February 15, in which they supported Emmerian air, land, and naval forces as they captured different sectors in the city. Garuda also protected them from cruise missile attacks by destroying Aigaion's drones in the airspace.[12] During the operation, Garuda shot down Estovakian ace pilot Goran Rosandic,[14] as well as another Estovakian pilot who Melissa Herman and Ludmila Tolstaya resuscitated.[15]

A battle plan to destroy the Aigaion and its Aerial Fleet was drawn up from San Loma's airfield. Garuda took part in the assault on the Aerial Fleet, acting as the lead squadron in the attacking force. Shortly after initiating the attack, Aigaion's escorts—the P-1113 Kottos and P-1114 Gyges—as well as the Strigon Team engaged the Emmerians, resulting in a massive and fierce air battle. Garuda whittled away at the Aigaion's escorts and Strigon Team, and eventually, Talisman dealt the final blow on the Aigaion, sending it crashing into the sea.[16] Garuda also shot down Lorenz Riedel, a Belkan defector responsible for the Aerial Fleet's design.[17]

Estovakia now considered Garuda Team (especially its squadron leader, Talisman) a major threat. Strigon Team, which had been using the Aigaion as a mobile base, was relocated to Gracemeria and assigned a new squadron leader: Ilya Pasternak, who was given the task of shooting down Talisman.[18]

"Ghost Eye, what the hell do you know about losing a family member. I'll take whatever the hell action I see fit!"
― Shamrock[19]

Emmeria continued to advance towards Gracemeria, resulting in the battle of Ragno Fortress and the battle of the Moloch Desert. Garuda Team participated in both battles, providing close air support and dealing the final blow especially to Ragno's air defenses.[1]

During the battle of the Moloch Desert, Emmerian forces were ordered to retreat after Estovakia threatened to use weapons of mass destruction on Gracemeria if Emmeria advanced any further. Shamrock, who had not been told the gravity of the situation, disobeyed the retreat order; Strigon Team entered the airspace to shoot down Garuda Team, and Shamrock returned fire. Talisman supported him in shooting down all of the Strigon members. When they returned to base, Talisman and Shamrock were penalized for defying a direct order and were restricted to doing nothing more than accessing their barracks.[19] 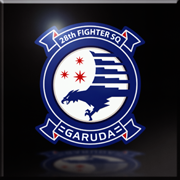 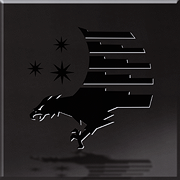 Retrieved from "https://acecombat.fandom.com/wiki/Garuda_Team?oldid=223093"
Community content is available under CC-BY-SA unless otherwise noted.