The Belkan Air Force 5th Air Division, 23rd Tactical Fighter Squadron Gelb is a Belkan ace squadron, made up of two Su-37 Terminators. Despite lacking in numbers, this pair of Ace pilots and their Su-37 'Terminator' are a threat due to firing missiles backwards at any enemies at their six o'clock positions. The two aircraft are perfectly cooperative with one another and have an effective cover system. They are featured in Ace Combat Zero: The Belkan War.

The Gelb Team, or the Belkan Air Force's 23rd Tactical Fighter Squadron, consists of a two-plane formation of two Su-37 Terminators. The squad's leader, Major Orbert Jager, and his wingman, Lieutenant Rainer Altman, were the pilots assigned to the Gelb Team. They were commonly assigned to interception missions along the Hydrian Line, the southern defense line. Due to their flawless and synchronized flying style, the two pilots became known as the "Coupled Cormorants".

In the beginning of the Belkan War in 1995, the Gelb Squadron was a large part of Belka's air and ground superiority, despite their odd formation. It was the flexibility their formation provided which allowed them to be more effective than a classic fighter squadron. However, when the Allied Forces went on the offensive, the Hydrian Line was stretched thin. The Gelb Squadron was forced to sortie five times a day in order to maintain the line, but due to the sudden attack, were left with little logistics support and not receiving even basic maintenance for their aircraft.

Despite being overused, the "Coupled Cormorants" maintained the battle-line, until they were sent to the Ustian capital, Directus, in order to stop the city from being retaken by the Allied Forces. However, they arrived late into the battlefield, but did engage the Ustian 6th Air Division, 66th Air Force Unit "Galm Team" and were shot down. The flight leader was killed in action, but Gelb 2 his wingman ejected safely and later went on to settle in the city where he was shot down over.

He served as Commander of an intercept squadron on Belka southern defense position, the Hydrian Line. Adopting the southern front as a base, he utilized his command of combat aerial tactics as a weapon to strike out at enemy forces in all directions.

Charged with the duty of preventing the liberation of Directus, he headed in the direction of the capital city, but was intercepted and shot down by Ustio forces. After the war, he married in Directus and is currently pursuing a career there as a writer. 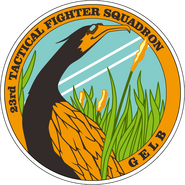 Retrieved from "https://acecombat.fandom.com/wiki/Gelb_Team?oldid=104909"
Community content is available under CC-BY-SA unless otherwise noted.