King of the Monsters

Godzilla is a daikaiju (大怪獣 daikaijū, giant monster) portrayed in numerous tokusatsu (特撮) films. He is considered to be a Japanese icon and recognized worldwide.

Godzilla appeared in Ace Combat Infinity in July 2015 as part of a Collaboration Event to promote the 2014 video game. He appeared in Tokyo Martial Law, along with a mechanized version, Mechagodzilla.

In June 2014, Bandai Namco announced the development of GODZILLA VS, a PlayStation 3 and PlayStation 4 video game that would allow players to control Godzilla or other kaiju related to him. The game was released in Japan on December 18, 2014. Its international release was simply given the name Godzilla and announced for July 14, 2015 in North America and July 17, 2015 in Europe.

On July 10, 2015, the trailer for that month's update in Ace Combat Infinity was published. Godzilla (and his original roar) was featured at the end of the video in Tokyo Bay,[1] leading to the assumption that a Collaboration Event was planned to promote the international release of Godzilla. 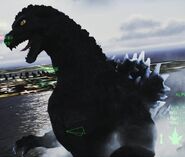 Side profile
Add a photo to this gallery

Retrieved from "https://acecombat.fandom.com/wiki/Godzilla?oldid=252004"
Community content is available under CC-BY-SA unless otherwise noted.