This article is about an in-game mission. For the in-universe event, see Operation Bird Hunt.

Destroy the enemy cargo unit and its escorts

Great Migration is the second mission of Ace Combat Infinity. Players are introduced to Viper and tasked to destroy an enemy transport unit.

Goodfellow: Following the Tokyo terror attack, the UN staged emergency inspections on facilities in Iyuli. They didn't obtain any evidence on the new UAVs we saw, but they did discover plans for an orbital weapon. Multiple nations are apparently involved in its development. The UN calls it "a violation of space treaties and a new threat to replace nuclear proliferation." They're demanding the project be halted immediately. As a result, the chief military official at Wernher's been forced out of the company. But this thing isn't over yet. In fact, it's just beginning. We've spotted a large squadron of unidentified transport aircraft heading for Area B9K, an aerospace center in the West Indies, accompanied by escort craft. The center was involved with the development of the space weapon I discussed. The nature of the cargo is unknown, but once we identify the craft as hostile, you have permission to shoot them down. Normally this would be a UNF or USAF job, but given how tense things have been with Latin America, the US doesn't want to pour any more oil on the fire. All in all, they'd prefer it if the media kept their focus on the Tokyo attacks instead of this. That's why they enlisted us "privateers" for their dirty work. It oughta be a pretty good payday for us. We'll be having our best pilot on this op. In Arrows, if you're a top earner, you get first priority over everyone else. You want money? You want fame? Then you're gonna have to outdo our ace here.

When the mission starts, the player will be unable to lock onto the unknown aircraft (it's still possible to fire machine guns and bring the aircraft's health down to minimum, but not destroy it). After Goodfellow confirms the craft are hostile, the player is free to engage. All enemy units are marked as TGT, but the player's ally aircraft will also be engaging the enemy units.

The first wave of enemies is one transport and two escorts. Once the transport is shot down, another escort will spawn further ahead and will fire a missile at the player, who is introduced to the concept of evading enemy fire.

When all three escorts are shot down, two more transports and a few more escorts will spawn. While the player engages this set of enemies, Goodfellow and Omega will instruct the player on Tactical Datalink. After all of these enemy units are shot down, Omega and Viper will banter for a little while about their aircraft and what they spend their money on: Viper on customizing his one aircraft, and Omega on buying new aircraft due to getting shot down so often. This is meant to serve as more instruction to the player, this time concerning the Aircraft Tree where players can spend their credits on more aircraft or customization parts.

Lastly, a wave of escorts will spawn. The player's allies will fight more aggressively this time, and possibly shoot down the majority of the enemy aircraft if the player isn't quick enough. Once all of these escorts are shot down, the mission is deemed successful.

An S rank on this mission requires completion in under 5 minutes. The player must simply aim to use the fastest of their available aircraft, and waste no time in shooting down the enemy units.

Goodfellow: Well done. The aerospace center emerged unscathed. We're investigating the transported cargo right now. For now, this'll remain a covert op. Now, I know you guys just went halfway around the world, but I've got more work for you. A group of nine high-powered executives known as the Greymen have been kidnapped in Russia. We're talking elite members of the most exclusive circles of world economics and government. Meanwhile, terrorist forces have occupied a Wernher military facility in Iyuli, in southwest Russia. We've got armed insurrections around other Wernher facilities, too, and we think they're connected. So, we'll be heading for Russia. 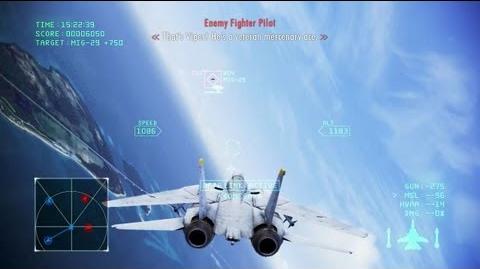 Hidden debriefing message
Add a photo to this gallery

Retrieved from "https://acecombat.fandom.com/wiki/Great_Migration?oldid=236335"
Community content is available under CC-BY-SA unless otherwise noted.