is a special version of the Gripen C featuring a large winged lion. It only appears in Ace Combat Infinity as a Special Aircraft.

"A special version of the Gripen C featuring a large winged lion.
It features improved acceleration and is capable of performing simple, sharp turns.
This golden guardian destroys all enemies that obstruct its path."
― Hangar

The aircraft was available during a Limited-Time Drop event in April 2015.
It was later available in the Special Supply Ticket Catalogue from August 2015 to September 2015, and then was made available permanently starting May 2016.

Nickname
Upgrading this aircraft to Level 20 unlocked the Winged Lion King nickname for use at any time. 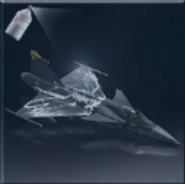 Retrieved from "https://acecombat.fandom.com/wiki/Gripen_C_-Griffon-?oldid=266216"
Community content is available under CC-BY-SA unless otherwise noted.