is a special version of the Gripen C featuring the character Takane Shijou from THE iDOLM@STER. It only appears in Ace Combat Infinity as a Special Aircraft. 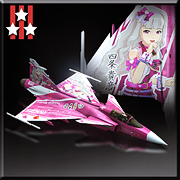 "A special version of the Gripen C featuring the same color scheme as Takane Shijou from THE IDOLM@STER series.
Unlike her arrogant aura and her mysteriousness, this aircraft features good and traditional flight performance."
― Hangar

Nickname
Upgrading this aircraft to Level 20 unlocked the Futatsu No Tsuki nickname for use at any time.

Retrieved from "https://acecombat.fandom.com/wiki/Gripen_C_-TAKANE-?oldid=218021"
Community content is available under CC-BY-SA unless otherwise noted.