"He is Aurelia's hero after all."
― An Aquila Squadron pilot

Gryphus 1 is the playable character in Ace Combat X: Skies of Deception. He is a Captain in the Aurelian Air Force and leads the Gryphus Squadron, stationed at Aubrey Air Force Base. He is by far the most famous pilot in Aurelia. Nothing is known about him apart from the fact that he dislikes hot weather.

Leasath took over ninety-five percent of Aurelia in just ten days (thanks to the Gleipnir, an advanced airborne fortress). When a B-52H Stratofortress squadron was sent in to destroy Aubrey Air Force Base, the Gryphus Squadron was sent to intercept the bombers in a desperate attempt to defend it. After the bombers were shotdown, the Gleipnir fired a Shock Wave Ballistic Missile that destroyed most of Gryphus Squadron. Only Gryphus 1, a heavily damaged Gryphus 5 and Gryphus 6 (the latter being shot down but surviving) were left alive.[1]

The remaining Aurelian pilots headed to Puna Plains, attacking the small airbase present to capture it and use it as their own resupply base.[2]

The route to Santa Elva

At the Battle of Kingshill, Gryphus 1 thwarted an attempt by Leasath's Miller Unit to reconquer Port Patterson.[4][note 1] He then rescued the Aurelian Army's Davis Unit trapped by enemy forces in Stand Canyon.[5]

Gryphus 1 participated in a rescue of an Aurelian scientist at Terminus Island, first by assisting the Aurelian Navy's diversionary operation, then defending the submarine Naiad when it was forced to surface after hitting a mine, and clearing an iceberg in its path.[6]

At Santa Elva, Gryphus 1 and the Davis Unit engaged the Gleipnir to liberate the city. He disabled the fortress's optical camouflage and destroyed its SWBM bays and defensive armament, severely crippling the fortress. When the Gleipnir attempted to use its Shock Cannon on the city, Gryphus 1 destroyed the weapon, and the maimed airborne fortress crashed in the Lenal River.[7]

Gryphus 1 soon became the spearhead of Aurelian operations and was feared in Leasath as "Nemesis".

During the Aurelian advance to retake their capital of Griswall, Gryphus 1 cleared Leasath forces gathering on the Kalana Steppes[8]. He subsequently covered a helicopter unit's assault to retake Sachana Air Base, defeating the base's anti-air defenses as well as RPG teams stationed in the surrounding jungle.[9]

Leasath attempted to move the Meson Beam Stabilizing Regulators manufactured in the Monte Breeze Industrial Area, to strengthen the Meson Cannons defending Griswall. Gryphus 1 penetrated the area and shot down the transports with the assistance of Aurelian recon units, despite the radar jamming from the Nevera Jammer.[10] He then advanced on Mount Nevera and took out the jammer itself.[11]

The Aurelian Liberation Corps revolted in Griswall, freeing the city centre from the Leasath occupation forces. Gryphus 1 and Ninox Squadron destroyed Leasath ground units attempting to breach the city's defenses, and stopped a missile attack by the Skylla Unit.[12]

Destroying Fenrir and ending the war

Aurelia discovered the existence of Fenrir, an experimental fighter with optical camouflage developed as a superweapon under Leasath's ruler Diego Gaspar Navarro. The Aurelian Air Force mobilized to destroy the Fenrir and its facilities at Archelon Fortress on Leasath's Sentry Island.

Gryphus 1 attacked facilities and cargo ships at Cobalt Cave that were preparing a new weapon for the Fenrirs. A defecting Leasath scientist taken into custody by Aurelian troops there identified the weapon as the High-Powered Microwave.[13] Gryphus 1 and Falco Squadron then sank a Leasath fleet headed to reinforce Archelon Fortress.[14]

At Sentry Island, Gryphus and Aquila Squadron were confronted by the elite Alect Squadron, brought in by Navarro to pilot the Fenrirs. Navarro hoped to broadcast the battle as a showcase for the Fenrir's capabilities during a public event in Leasath.[15] With the help of an Aurelian amphibious unit, Gryphus disabled the energy transmitter powering the Fenrirs' optical camouflage and shot down the Alects, then entered Archelon Fortress and destroyed another Fenrir attempting to escape with the data.[16]

The resulting destruction of the Fortress led to the fall of Navarro's government. Navarro was stormed by a mob of his enraged citizens and disappeared.[17]

After the war, Gryphus 1 returned to Cape Aubrey. It is unclear whether Albert Genette, who was in Aurelia covering the war, managed to get an interview with him.[17]

Appearances in other Ace Combat titles

Gryphus 1 has only made one other physical appearance in an Ace Combat title outside of Ace Combat X: Skies of Deception. 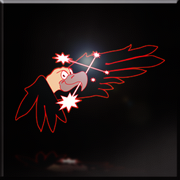 The F-22A -GRYPHUS EMBLEM- in Ace Combat 6: Fires of Liberation

Retrieved from "https://acecombat.fandom.com/wiki/Gryphus_1?oldid=264850"
Community content is available under CC-BY-SA unless otherwise noted.