The 207th Tactical Fighter Squadron, also known as the Gryphus Squadron, is a high level ace squadron of the Aurelian Air Force. It is a top secret squadron tasked for border defense, whose existence remained classified until the year 2020.

The Squadron became one of the last active squadrons in Aurelia during the Aurelian War, and was assigned with the air defense of Aubrey Air Force Base, the last standing AFB on the country.

In September, a Leasath Air Force bomber squadron was sent to Aubrey AFB in an attempt to destroy the base, but were intercepted by Gryphus Squadron while approaching their target. Not all ended well, however, as Aubrey was hit by a Shock Wave Ballistic Missile launched from the Gleipnir at Puna Plains in the south. As a result, the base suffered massive damage and most of Gryphus Squadron was annihilated in the missile attack, except for flight leader Gryphus 1, 5 and 6, who followed their leader throughout the game. Afterwards, the squadron went on the offensive, first taking over Puna Plains' forward operating base, then providing air cover for the remains of the Aurelian Army in the recapture of Port Patterson. After the capture of Port Patterson, the Army, Navy, and Air Force began to rush across the southern part of Aurelia, soon capturing Santa Elva, and pushing into Griswall. However, before Aurelian forces were able to recapture Griswall, the Meson Cannon had to be taken offline or destroyed.

After the Meson Cannon was destroyed or offline, the capital was recaptured, and the war was technically over. However, the Leasath's commanding officer has disappeared, and was followed by Otus Squadron of the Aurelian Air Force. However, two Otus pilots were shot down by the Fenrir which had launched from Leasath's last stronghold, Archelon Fortress. This marked the beginning to the war's end, and Aurelia began planning a final assault on Archelon.

Unnamed Captain is the 207th Tactical Fighter Squadron commander stationed at Aubrey Air Force Base. Often called the Southern Cross by both allies and enemies in reference to the squadron's insignia, he is responsible for most of the counterattack and reclaiming Aurelia from Leasath. Not much is known about him except that him is the most famous pilot in his country and he hates hot weather.

2nd Lieutenant Rick was Gryphus Two. He was very proud of his country, Aurelia, along with liking the Gryphus logo of the squadron, but he was killed by the Gleipnir over Cape Aubrey.

2nd Lieutenant Roy was Gryphus Three in the 207th Tactical Fighter Squadron. Like Second Lieutenant Rick, Roy was killed by the Gleipnir over Cape Aubrey.

Fifth member of the Gryphus Team. Sole survivor of the Aubrey Air Base missile attacks, followed Gryphus One until the Alect Squadron ambush at the Danern Straits later in the war, where he was shot down, but he survived because he ejected before his aircraft gets destroyed. However, he will not get shot down if Gryphus One manages to defeat the Alect Sqaudron quickly enough.

Last member of the Gryphus Team. There is no exact information on him, however he was also shot down over Cape Aubrey, but survived. He return again with Gryphus 1 and Gryphus 5 later. 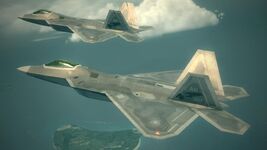 Gryphus Squadron's new F-22A Raptor's.
Add a photo to this gallery
Retrieved from "https://acecombat.fandom.com/wiki/Gryphus_Squadron?oldid=106582"
Community content is available under CC-BY-SA unless otherwise noted.