A howitzer is an artillery gun commonly used throughout the Ace Combat series. They are usually used by enemy ground forces to attack allied ground forces. They are extremely weak and can be quickly destroyed.

Howitzers are used for firing shells at high trajectories and low velocities. They are typically used in large numbers by a ground force to stave off opposing ground units at a moderate distance. Howitzers are not used against aerial targets given the lack of accuracy against high-speed aircraft.

While howitzers can be easily destroyed by any type of weaponry, usually only taking one player-launched standard missile to destroy, allied ground forces under howitzer fire are typically pinned down and must await air support.

Russian 2S19 Msta howitzer next to a truck and rocket launcher

A 2S19 Msta of the USEA Federation

A 2S19 Msta of the USEA Federation 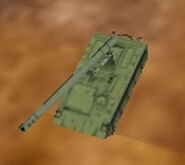 Retrieved from "https://acecombat.fandom.com/wiki/Howitzer?oldid=241774"
Community content is available under CC-BY-SA unless otherwise noted.