The IUN is an international peacekeeping organization in the Strangereal universe. The organization also maintains the IUN Peacekeeping Force (IUN-PKF),[5] a military force comprised of air, land, and sea units. While some of these are Usean military units,[6] over half of the IUN-PKF's units belong to the Osean Defense Forces.[7] 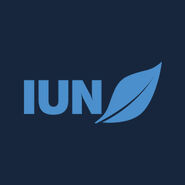 Retrieved from "https://acecombat.fandom.com/wiki/IUN?oldid=254893"
Community content is available under CC-BY-SA unless otherwise noted.