The Il-76 is a four-engine cargo aircraft. It debuted as part of the Russian Air Force in Ace Combat: Assault Horizon, and also appeared in Ace Combat Infinity and Ace Combat 7: Skies Unknown as an enemy aircraft.

In 2014, Free Erusea stole several IL-76s and used them to airdrop tanks to attack an IUN-PKF base in Scofields Plateau. All were destroyed by Mobius 1.[1]

The Erusean Air Force utilized Il-76s during the Lighthouse War. They would be spotted supporting the Erusean Navy during Operation Siren's Song.[2]

In the Assault Horizon universe, Il-76s were adopted by the Russian Air Force as a common transport aircraft.

In December 2015, a group of Il-76s stationed at the Kryazh Airport in Samara were destroyed by a Trinity attack on the airport from the New Russian Federation militant group.[citation needed]

On January 3, 2016, a squadron of Il-76s–Sova Squadron–was attempting to ferry medical supplies and doctors to the loyalist Belyi Base when the base and transports came under attack by the New Russian Federation. The transports were rescued by Task Force 108's Warwolf Squadron, who escorted them to the airfield and thwarted the attacking units.[3]

In the Infinity universe, the USEA Federation made heavy use of Il-76s. A small squadron of Il-76s was escorted to Comona Base for an unknown shipment, but Bone Arrow Squadron shot all of them down.[4]

USEA outfitted many of their Il-76s with electronic jammers to hinder the United Nations Forces during Operation Eternal Liberation.[5][6] 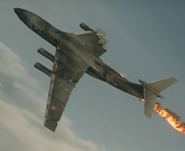 An Erusean Il-76 on an oil rig

IL-76 of the USEA Federation

Retrieved from "https://acecombat.fandom.com/wiki/Il-76?oldid=251604"
Community content is available under CC-BY-SA unless otherwise noted.