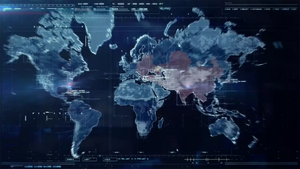 "Anything one man can imagine, other men can make real."
― Jules Verne, Around the World in Eighty Days[1]

The Infinity universe is a fictional timeline of the real world in which the story of Ace Combat Infinity is based. It is the third unique continuity set in our world, following the Assault Horizon and Joint Assault universes.

The defining characteristic of the Infinity universe is its attempt to meld the world of Ace Combat: Assault Horizon and its supplementary media with Strangereal mythology, retconning concepts such as superweapons, characters and countries from the latter into our world.

Ace Combat Infinity is set in an alternate universe where history followed the same course as in our world, including events such as the rise of the Mongol Empire, the Cold War, and the collapse of the Soviet Union. The point of divergence between both universes occurs in July 1999, when Earth is struck by a mass impact event caused by fragments of the 1986VG1 Ulysses and Polyphemus asteroids, both destroyed in a collision in the orbit of Jupiter, plunging the world into an era of economic and political collapse. This event, known as the Ulysses Disaster, is an extrapolation of Ulysses 1994XF04's impact in Strangereal, extending from damaging solely the Northern Hemisphere into encompassing the whole planet.

The chaos following the Ulysses impacts ravages the world economy and leads to a widespread scarcity of resources, leading to civil wars and localized conflicts across Africa and Eurasia, the latter of which suffered a large majority of asteroid strikes, particularly in Eastern Europe, and the formation of federations by Asian and Southern European nations to stave off economic collapse. Combined with the global diverting of military funds towards reconstruction projects, the wars lead to the meteoric rise of the private military contractor industry, with many former professional pilots joining PMCs as mercenaries. The sudden change in the global stage leads the United Nations to undergo militarization and adopt its own professional army, the United Nations Forces.