In the early days of the Belkan War, Cipher operated the Draken as his starter aircraft before moving on to the F-15C Eagle.[2]

During the counter-insurgency operation against the organization "A World With No Boundaries" in 1995, Alberto Lopez, flight leader of the organization's Espada Team, used a Draken as his main aircraft until the squadron's defeat in Operation Valkyrie.[3] In addition, 2 other aces, Felix Boesch, callsign Blitz,[4] and Emil Wilheim, callsign Zugvogel,[5] also used the Draken.

During the Usean coup d'état, Usean Rebel Forces deployed a limited number of Drakens over the Chopinburg Rainforest as depicted in Ace Combat 2[6]. However it is absent in Ace Combat: Assault Horizon Legacy's version of the event.

The Draken was made available for UNF pilots to use against USEA Federation forces during Operation Eternal Liberation.

"A multirole used by five countries, including the Swedish Air Force.
The first aircraft in the world to use the double delta main wing, as well as pioneering strakes and the blended wing body, having a large effect on subsequent aerospace design.
It demands a high level of piloting skills to fly, due to a lack of flight stability and no fly-by-wire style control system.
Known as the "Draken", meaning "dragon.""

The Draken is available through the Aircraft Tree.

Two-tone desert camouflage, possibly based off of Shin Kazama's J35J from Area 88

The aircraft is automatically unlocked and purchased at the start of the game. 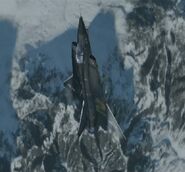 The aircraft is named SF-35 in this game.

Retrieved from "https://acecombat.fandom.com/wiki/J35J_Draken?oldid=266098"
Community content is available under CC-BY-SA unless otherwise noted.