The Jilachi Desert is a desertic plain located in the central regions of the Union of Yuktobanian Republics.

During the Circum-Pacific War, there were two Yuktobanian defensive lines setup in this desolate landscape, ahead of the advancing Osean Army and Osean Air Force, as they pushed their way through the Bastok Peninsula and to the very “heart” of Yuktobania, the capital city of Cinigrad. When the Osean forces reached Jilachi Desert, they formed two pairs of fighting forces to capture the Yuktobanian defensive positions and forward airbases.

Having gained control of several strategically important positions in Yuktobanian soil, the Osean Armed Forces commenced a large-scale invasion of the Jilachi Desert in November 25, 2010, which is possibly the largest deployment of Osean troops in the entirety of the Circum-Pacific War. The invasion was divided into two parts: Operation: Desert Arrow, which consisted of the raid of the enemy's main headquarters and a airfield in northern Jilachi, and Operation: Desert Blitz, which consisted of attacks to an oil field and airfield located in southern Jilachi.

The first pair of Osean offensive ground and bomber groups is dispatched along with the 108th "Wardog" Tactical Fighter Squadron in the northern area of the Jilachi Desert. Their orders are to capture the Yuktobanian forward airbase and the Yuktobanian field headquarters. The Wardog Squadron was forced to cover both air and ground forces, which participated in Operation Foot Print, at the same time. This put much strain on the Wardog pilots as they crisscrossed across the desert. The Osean squadron of B-52H Stratofortress (Viking Squadron), supported by A-10A Thunderbolt II aircraft was defended from relentless attacks of Yuktobanian Air Force fighters, which were operating from the near by forward deployed airbase. Osean ground forces managed to make their way across the desert after the Wardog repelled waves of fighters, two AC-130 Spectres and a Yuktobanian formation of two Avro Vulcan and two B-52 Stratofortress bombers. The Osean ground forces took the airbase’s runway and effectively shut down all air operations in the area. The Osean bomber squadron bombed the Yuktobanian field headquarters and left the area. At that time, a Yuktobanian air group entered the battle area with orders to reclaim air superiority and destroy Osean ground forces. The air group consisted of two E-767s, a KC-10 Extender tanker and multiple fighters. The Wardog squadron engaged the Yuktobanian air group and destroyed all aircraft in the area. The 108th then landed at the recently captured air base and ended their operation.

The second pair of Osean offensive ground and air forces focuses on capturing the southern Jilachi airbase and other strategic facilities. Wardog Squadron also participated in this offensive campaign. The 108th’s task was to support the advance of two Osean Armored Divisions as they advanced on Yuktobanian positions. The Wardog Squadron fought off Yuktobanian fighters and engaged Yuktobanian ground forces; in the southern area of the battlefield, a Yuktobanian defensive position was destroyed by heavy air strikes, allowing Osean ground forces to continue to the oil fields. In the northern area of the battlefield, the Osean Self Defense Forces were engaged by a squadron of Yuktobanian AH-64A Apache attack helicopters and were attacked from the rear by airborne tanks, which were dropped into the battle by Yuktobanian transport plane. Wardog quickly destroyed these forces and struck targets on the runway and surrounding the runway at the Yuktobanian airbase. The oil fields were also secured; Osean forces successfully complete their mission. However, as the Osean ground forces began to claim the Yuktobanian facilities, a Yuktobanian Navy team consisting of one Krivak-class frigate and one Iowa-class Battleship (YNS Upor), supported by artillery and anti-air ground forces; entered the combat zone as they followed the Semya River. The combined Yuktobanian team began to launch heavy artillery strike at Osean ground forces. The Wardog Squadron quickly reached the Semya River to destroy two Yuktobanian warships, artillery and anti-air ground forces, thus ending the battle. 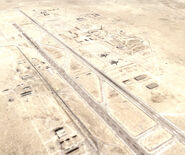 A Yuktobanian airbase at Jilachi Desert
Add a photo to this gallery
Retrieved from "https://acecombat.fandom.com/wiki/Jilachi_Desert?oldid=113776"
Community content is available under CC-BY-SA unless otherwise noted.