"Out of the frying pan, into the fire. Story of my life."
― José Gutierrez[1]

José "Guts" Gutierrez was a United States Air Force pilot and member of the Warwolf Squadron.

José was born to parents of Latin descent in the state of Florida in 1983, and lived a somewhat troubled childhood. He joined the United States Air Force in his adulthood, where he eventually ascended to the rank of Captain as an F-15 Eagle flight instructor and befriended William Bishop.

In late 2015, José and Warwolf were transferred to East Africa as part of NATO Task Force 108 to counter the growing militant movement sweeping the region, operating under Pierre La Pointe's command at an airfield in Hamada. In December 20, he and Bishop saved Russian pilot Sergei Illich from a rebel attack while on duty, leading him to jokingly ask Illich for large amounts of vodka as compensation.[2]

The following day, he and Bishop were summoned to a briefing by La Pointe concerning the weapon of mass destruction discovered by Shooter Squadron while battling rebel forces in a local town, launching with Big Bear Squadron and Lion Squadron on a combat mission afterwards. Narrowly surviving the crash of a KC-10 tanker on the base, he and his squadmates destroyed several rebel aircraft attacking it before Illich was shot down.[2]

On December 23, José and Warwolf were involved in a SEAD mission on Mogadiyu to allow Janice Rehl to provide aerial support to Delta Force troops from the AC-130U Spooky Spooky 01. Two hours later, the squadron returned to Hamada after rescuing a civilian aircraft from rebel aircraft as the nearby city of Carruth came under a heavy militia siege. After battling insurgent air forces and enduring Big Bear's betrayal, he was nearly killed by Andrei Markov, who turned his attention to Bishop and came close to ending his life before leaving with his Russian compatriots.[3]

With Blatnoi's open declaration of insurrection in Russia, José and Task Force 108 were moved to the Persian Gulf to defend the city of Dubai in the United Arab Emirates from an impending Russian air attack with Trinity-equipped weapons announced by the group, which was foiled by their intervention.[4] Following the campaign on the Persian Gulf, they were mobilized to Russia on a NATO-led campaign to shut down the main bases of the New Russian Federation on east Russia to quell the uprising, beginning with the city of Derbent on New Year's Eve.[5]

Warwolf 2, blocking the missile that headed for Bishop in "Homefront"

Helicopter Preparing for save Guts in Miami offshore 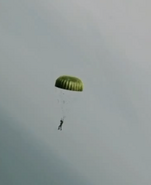 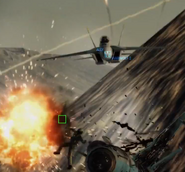 Guts in an F/A-18F Super Hornet

Retrieved from "https://acecombat.fandom.com/wiki/José_Gutierrez?oldid=249965"
Community content is available under CC-BY-SA unless otherwise noted.