Start a Wiki
watch 02:35
The Loop (Games)
Do you like this video?
pencil
We've still got some work for you, too, so don't slack off now.
This article or section is a stub. You can help by expanding it.

Landing ships are vessels designed to transport vehicles and cargo across water.

Landing ships were fielded for decades in the Strangereal universe but how far back their deployment goes is unknown.

During the Usean coup d'état, landing ships were utilised by both the Usean Allied Forces and the Usean Rebel Forces. During the rebel's bomber attack on Anchorhead, a landing ship, callsign Leonid, was seen heading west for unknown reasons. The ship was later sunk by Scarface Squadron.[1] During Operation Alphaville, the Usean Allied Forces deployed Petral Coost to Rocky Island in order to assist Scarface Squadron in destroying Turntable, a geothermal power plant. After Petral Coost reached the shore, a landing team was deployed in order to open the vents so that Phoenix could fly in and destroy the core. This mission was a success.[2]

During the Circum-Pacific War, landing ships were utilised by the Yuktobanian Navy during their assault on the Sand Island Air Force Base.[5] The Osean Army also utilised landing ships during Operation Footprint.[6]

During the Emmeria-Estovakia War, landing ships were fielded by the Republic of Emmeria Navy during the Rargom Beach offensive to transport hovercrafts carrying the Warlock Separate Battalion and the Quox Armored Battalion.[7]

During the Aurelian War, landing ships were fielded by the navies of both Aurelia and Leasath.[8] Notable units include the 5th and 7th Amphibious Units.[9][10]

Landing ships were fielded by the Valahia during their attack on Boso Peninsula. All units were sunk by Antares Squadron.[11]

During Operation Eternal Liberation, landing ships were utilised by the USEA Federation.[12] 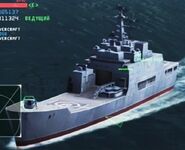 Retrieved from "https://acecombat.fandom.com/wiki/Landing_ship?oldid=253917"
Community content is available under CC-BY-SA unless otherwise noted.