watch 02:45
Wiki Targeted (Games)
Do you like this video?
Play Sound
pencil
We've still got some work for you, too, so don't slack off now.
This article or section is a stub. You can help by expanding it.
pencil
All right, gentlemen, it's time to clean house!
This article or section may require a cleanup to meet Acepedia's quality standards.

The force was known to have been deployed during both the Leasath Civil War in 2019 and the Aurelian War in 2020.

During the Leasath Civil War, the Chimera Squadron became renown for their various accomplishments. This would establish them as an elite unit in the Leasath Air Force.[1]

In 2020, the Leasath Air Force was deployed during the Aurelian War. Many operations would be carried out against Aurelia, and soon after, much of Aurelian territory was lost to Leasath. Despite holding a significant advantage early on in the war, the loss of the Gandr[1] and Gleipnir aerial warships at the hands of the Aurelian Air Force saw the tides begin to turn in Aurelia's favor. Leasath was eventually pushed back and ultimately lost the war.[2] 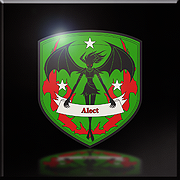 Alect Squadron emblem
Add a photo to this gallery

Retrieved from "https://acecombat.fandom.com/wiki/Leasath_Air_Force?oldid=260747"
Community content is available under CC-BY-SA unless otherwise noted.