Start a Wiki
watch 02:27
The Loop (Games)
Do you like this video?
pencil
All right, gentlemen, it's time to clean house!
This article or section may require a cleanup to meet Acepedia's quality standards.

"We've got a chance with those guys watching over us up there!"
― Louis McKnight

Sergeant Louis McKnight is an Emmerian tank commander. His tank crew consists of himself and two other sergeants, Donnie Torch and Kevin Hobsbawm.

McKnight is first seen guarding a bridge and directing Emmerian refugees across it. However, McKnight and his unit are ambushed and annihilated by Estovakian planes, with McKnight and two other sergeants being the only survivors. He managed to link up with the rest of the Emmerian forces and becomes the unofficial captain of his tank after drawing straws.

Shortly before the Emmerian landing operation on the mainland, McKnight and his crew devised a plan to loot the Gracemeria Central Bank, believing that the Estovakians haven't been able to open the vault yet and because one of the crew, Donnie, insists that he had dug a tunnel to the vault. They attempted to desert their unit in the midst of the Rargom Beach offensive and make their way to Gracemeria but were forced to pull back once enemy firepower proved too intense.

During the Liberation of San Loma, the company took part in the operation being carried out by Warlock Separate Battalion. They defeated Oleg Battalion and managed to push through to the city of San Loma. From there, the tank deserted and began to make their way to Gracemeria.

On the way, they come across and pick up Melissa Herman and Ludmila Tolstaya and kindly gave them a ride to the outskirts of Gracemeria before going their separate ways.

During the liberation of Gracemeria, McKnight and his crew attempt to break into the vault, but end up inadvertently rescuing Victor Voychek, Matilda Herman, and the statue of the Golden King. Instead of stealing it, McKnight and his crew strap the statue to their tank and parade it around Gracemeria as a symbol of liberation. As a tribute to their country, the tank is left in the town square. Gallery

Louis with his team 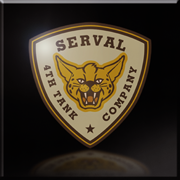 Retrieved from "https://acecombat.fandom.com/wiki/Louis_McKnight?oldid=251239"
Community content is available under CC-BY-SA unless otherwise noted.