"Enemy leaders are using choppers to escape from the HQ."
― ISAF soldier[1]

The V-22[2] is a transportation helicopter that features a special tiltrotor design. It has made few appearances in the Ace Combat franchise.

The V-22 was designed in 1982[3] as the first practical tiltrotor VTOL aircraft in history. When a V-22 takes off, its rotors are pointed upward like a typical helicopter to provide lift. After takeoff, the V-22 lowers its rotors towards the front to provide stable flight.[2]

The V-22's specifications are as follows:[2]

V-22s were in service with the Federal Erusea Air Force during the Continental War. During Operation Autumn Thunder, Erusea's top military leaders attempted to escape using four V-22s. All were shot down during the operation. However, a fifth V-22 was supposed to take off and attempt escape as well, carrying the Erusean Supreme Commander at the time; for some reason, it never took off, and the supreme commander had died due to some circumstance by the time ISAF discovered the chopper.[1]

The V-22 was also present during the Lighthouse War, utilized by both the Osean Air Defense Force and the restored Erusean Air Force. During an Erusean bombing raid on Fort Grays Island, Osean V-22s were used to temporarily move IUN personnel to a safer area.[4] During Operation Lighthouse Keeper, Vincent Harling and Colonel Johnson commandeered an Erusean Air Force V-22 in an attempt to escape the Erusean controlled International Space Elevator. The aircraft was shot down during a dogfight between IUN fighters and Erusean MQ-101 UCAVs, resulting in the deaths of Johnson and Harling.[5]

The Erusean Royal Navy also used the V-22 during the same conflict. During Operation Domino, in which the Osean Air Force launched a surprise attack on the Navy at Anchorhead, multiple V-22s were used to evacuate high ranking Navy officers in the city. 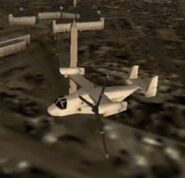 Mother Goose One's V-22
Add a photo to this gallery

Retrieved from "https://acecombat.fandom.com/wiki/MV-22?oldid=255309"
Community content is available under CC-BY-SA unless otherwise noted.