This article concerns the superweapon. For the mission, see Megalith (mission). For other uses, see Megalith.
For the Ace Combat Infinity superweapon with the same purpose, see Orbital Laser Defense System.

"The only way to destroy this highly dangerous and fortified facility is to hit it from the inside."
― ISAF briefing officer[1]

Megalith was an Erusean superweapon built on the Twinkle Islands. It was designed to weaponize asteroid fragments in orbit around Earth; the facility launched missiles that struck fragments in such a way that they would change their course and crash onto the planet.

Megalith was constructed in secret during the Continental War and immediately activated as a retaliation weapon following Erusea's defeat. The ISAF Air Force's Mobius Squadron, led by Mobius 1 and supported by Bravo Team, subsequently destroyed the facility.

Erusean engineers began working on Megalith by sometime in the 2000s. It is unknown if the concept existed prior to the Continental War, but the facility was well under construction following Stonehenge's destruction.[2]

In May 2005, an ISAF spy plane, callsign "Leopard", obtained photographic evidence of the construction efforts, prompting the ISAF to bolster its own efforts in defeating Erusea before Megalith could be completed.[2] The ISAF was ultimately successful: Erusea was unable to employ Megalith before its capital, Farbanti, fell to the ISAF in September.[3]

One week after Erusea's surrender, a group of young officers took over Megalith with the intention of using it against ISAF in retaliation for their country's defeat. On September 26, ISAF dispatched a special forces team (led by Bravo 1) and the newly formed Mobius Squadron (under the command of Mobius 1) to destroy the facility. The Erusean forces responded by launching a defense squadron to intercept Mobius Squadron.[1]

Despite the Erusean officers' fierce attempts to hold them back, as well as heavy casualties on both sides, ISAF slowly overpowered the Eruseans. Bravo 1's ground unit held positions in the facility while Mobius 1 destroyed three main generators from inside Megalith's access tunnels. The resulting blackout allowed the special forces to assume control of the sub-control room and open the central heat vent. Mobius 1 flew into the opening and destroyed the large ICBM stored within. After he escaped using another set of panels opened by the ground forces, the warhead's detonation triggered an explosive chain-reaction within Megalith, rendering it inoperable.[1]

Over a decade after it was disabled, during the Lighthouse War, Jaeger briefly considered relocating the Long Range Strategic Strike Group to Megalith to use it as a base for self-defense. Ultimately, he instead chose to rendezvous with allies at Tyler Island.[4]

Megalith was a massive facility that encompassed several hundred square kilometers. Most of its systems were operated from a sub-control room located on the 13th floor of the structure. The facility's main missile port grooves were armed with multiple ICBM silos and laser targeting systems, which "painted" the desired asteroid(s). Several tunnel openings—located along Megalith's north-south and east-west axes—led to the generators that powered many of its critical systems. The facility also contained four large missile launchers, as well as a fifth, even larger central silo; these launchers had the capacity to fire more powerful ICBMs.[1]

It is possible that Megalith could also have been used to launch ICBMs directly at targets anywhere within its operational range. However, the facility's ability to redirect Ulysses fragments was ultimately used to turn asteroids into kinetic weapons, forcing them to descend from orbit and cause tremendous damage across a large target area.[1]

Megalith's name comes from the word "megalith", which is a large stone used to build a structure or monument. The term is typically used to refer to tombs constructed in this way, particularly in Europe, as well as for sacrificial ceremonies. Stonehenge, the namesake of the superweapon, is considered to be the most popular European megalith.

Both uses of megaliths have symbolic meaning to the nature of the mission; numerous ISAF and Erusean soldiers died in the fight (fulfilling its purpose as a tomb), and Mobius 1 symbolically sacrificed his life to destroy the large missile (fulfilling a sacrificial ceremony). In addition, from above, Megalith strongly resembles a cross or crucifix. The mission's background music, particularly Megalith -Agnus Dei-, further references this symbolism. 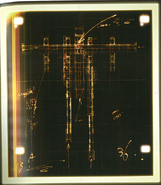 Retrieved from "https://acecombat.fandom.com/wiki/Megalith_(facility)?oldid=265885"
Community content is available under CC-BY-SA unless otherwise noted.