is a Special Aircraft variant of the MiG-1.44 Flatpack featuring the livery of Allen C. Hamilton, the Adjutant Base Commander of the Sand Island Air Force Base. 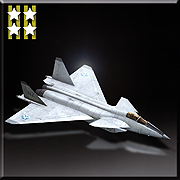 "A special aircraft based on the Mig-1.44[sic] of a young and talented pilot who was also an Adjutant Base Commander. The aircraft can carry fuel-air explosive bombs to cause massive damage on ground targets and with its enhanced speed it can chase down fearful enemies. Recent investigations have changed the pilot's reputation as a model soldier that served his military well. He is now perceived as a spy for a certain country. Reports show that as he expanded his network of acquaintances through exchange programs, he was recruited by intelligence officers but his mysterious actions did no benefit to either country, making it difficult to sum him up as a normal spy, adding more mystery to his true identity. More investigation is needed and more classified information must be revealed for the real truth to be known about this man."
― Hangar

Nickname
Upgrading this aircraft to Level 20 unlocked the War Ender nickname for use at any time.

Retrieved from "https://acecombat.fandom.com/wiki/MiG-1.44_-Hamilton-?oldid=232376"
Community content is available under CC-BY-SA unless otherwise noted.