is a modified version of the MiG-1.44 Flatpack, featuring the livery of Milosz Sulejmani, the leader of Varcolac Squadron. It only appears in Ace Combat Infinity as a Special Aircraft. 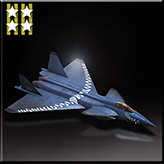 "A special version of the MiG-1.44 based on the first aircraft from an infamous squadron that fought for a variety of causes. It has been balanced to remove all disadvantages, making it capable of responding to the demands of any mission. The original pilot was a stripped-down, hungry man who placed his own life and his money above all else, and formed a squadron of individuals with a similar mindset. He was a dangerous individual who would change his allegiance at the drop of a hat, under the right conditions. However, his bold combat skills, honed since a young age on the battlefield, could also never be underestimated."
― Hangar

The aircraft was available during a Limited-Time Drop event in August 2015.

Nickname
Upgrading this aircraft to Level 20 unlocked the Betrayer nickname for use at any time.

Banner advertising the aircraft and the MiG-29A Event Skin #02

Retrieved from "https://acecombat.fandom.com/wiki/MiG-1.44_-Sulejmani-?oldid=224297"
Community content is available under CC-BY-SA unless otherwise noted.