is a Special Aircraft variant of the MiG-21bis featuring the livery of Wolfgang Buchner's MiG-21bis during his affiliation with the Belkan Air Force. 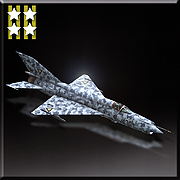 "A special version of the MiG-21bis based on the aircraft flown by a legendary ACE pilot nicknamed the "Raven".
Speed and maneuverability have been improved beyond its limits, rising above even the limits of its modernized versions. Though the pilot was a descendant of a prominent family of soldiers, he was thought to be a pilot who went AWOL, defamed and missing. However, the recent unveiling of classified documents released during the merging of nations have shown that he was actually secretly granted asylum as a refugee in another country. While rumors are whispered that he defected due to inter-military power struggles, his true motives for defecting have not been clear as he has maintained his silence."
― Hangar

The aircraft was available in the Skilled Pilot Medal exchange program. Players can exchange 500 medals to acquire the aircraft.

Nickname
Upgrading this aircraft to Level 20 unlocked the Raven nickname for use at any time.

Retrieved from "https://acecombat.fandom.com/wiki/MiG-21bis_-Huckebein-?oldid=224933"
Community content is available under CC-BY-SA unless otherwise noted.