View source
watch 02:23
Wiki Targeted (Games)
Do you like this video?
Play Sound

is a Special Aircraft variant of the MiG-21bis in Ace Combat Infinity based on Viper's aircraft.

The aircraft was utilized during the early stages of Operation Eternal Liberation by Bone Arrow Squadron member Viper, who retired after Operation Override.[1] 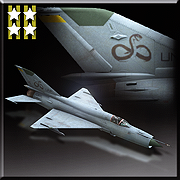 "A special version of the aircraft flown by an ace pilot from Arrows Air Defense and Security. Compared with the original aircraft that is based of, this aircraft features a durable body and big improvements to performance. However, it requires significant financial investment in order for the pilot to realize its true potential. The original ace pilot of this aircraft had a unique philosophy and was able to make some easy money, and ultimately he made a soft landing. Pilots will need to have a certain level of competence with this aircraft to achieve what that ace pilot did."
― Hangar

This aircraft was only available in the "ACE COMBAT 20th Anniversary" Ranking Tournament in early July 2015.

Nickname
Upgrading this aircraft to Level 20 unlocked the Chief Grim Reaper nickname for use at any time.

Community content is available under CC-BY-SA unless otherwise noted.