The MiG-21bis served with multiple nations in several conflicts in Strangereal. During the Belkan War, the Belkan Air Force deployed MiG-21s on the stable and low intensity eastern front of the conflict, although it was still the choice aircraft for several famous Belkan aces for front line fighting.

The Federal Erusea Air Force used the aircraft during the early part of the Continental War.

During its covert reconnaissance attempts against Osea prior to the Circum-Pacific War, Yuktobania used unmarked MiG-21s to harass interfering Osean aircraft.

Blatnoi provided MiG-21s to the SRN insurgency as part of its plot to overthrow the Russian government. It was their only asset against NATO's Task Force 108, during which is faired poorly.

Thanks to Advanced Automated Aviation, the MiG-21bis rose to fame once more in the late 2010s since they were some of the cheapest aircraft to reproduce. Arrows Air Defense and Security acquired a number of these, allowing Viper to use one. The ace pilot heavily customized it using the majority of his earnings from operations.The USEA Federation also acquired the aircraft before and during its uprising and made heavy use of them to patrol their conquered holdings.

"A classically-designed small, low-weight fighter combining delta wings and horizontal tail wings. White its tricky controls ask a lot of the pilot, it boasts an impressive war record. It also has a number of nicknames on account of its striking appearance in the sky."
― Hangar

The MiG-21bis is unlocked automatically following completion of Campaign Mission 4, "Rescue". No MRP is required for the aircraft or any of its weapons.

"An old Soviet Union fighter created in the pursuit of smaller size, lighter weight and lower costs. While it is old, with dubious electrical equipment and weapon carrying capabilities, its light weight provides excellent speed capabilities. However, due to low stability when rolling, it takes a while to become accustomed to handling it. Known by the NATO codename of "Fishbed", more than 10,000 were produced (including variants) and distributed to the countries of the old Eastern Bloc, making it an extremely well selling fighter."
― Hangar

The MiG-21bis is available for research on the Aircraft Tree immediately when logging into the game. 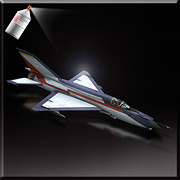 Flyby with Viper's emblem, and Viper in background 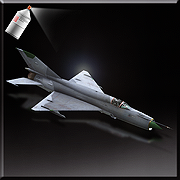 "A fighter created by the former Soviet Union in the pursuit of small size, light weight, and low cost. Its outdated electronic equipment and weapons equipping performance are unreliable, but its light weight gives it excellent speed performance. However, stability during high speed rolls is low, so a high level of flight experience is required. Called by the NATO codename "Fishbed", more than 10,000 of this hugely popular fighter were deployed by former Eastern Bloc nations."
― Hangar description

The aircraft is available upon aircraft selection for Inferno.

"A small, single-engine fighter, codenamed "Fishbed." While its electronics and weapons capability are outdated, it makes up for it with high maneuverability and low cost."
― Hangar

A MiG-21bis in "The Round Table

The MiG-21bis in VS Mode

"A small, single-engine fighter, codenamed "Fishbed". While its electronics and weapons capability are outdated, it makes up for it with high maneuverability and low cost."
― Hangar

This plane cannot be unlocked for use by the player.

The aircraft is displayed as MiG-21.

A collection of five MiG-21's, as seen in the intro

Retrieved from "https://acecombat.fandom.com/wiki/MiG-21bis_Fishbed?oldid=260855"
Community content is available under CC-BY-SA unless otherwise noted.