View source
watch 02:56
Raise a Floppa - The Loop
Do you like this video?
Play Sound
footnote
This article or section needs additional citations for verification.
Please help improve this article by adding citations to reliable sources.
Unsourced material may be challenged and removed.

"They are not our usual thugs. Their Fulcrums are a hell of a lot better than the rebel crates."
― Lion 2

The MiG-29A Fulcrum is a fourth-generation fighter. It made its debut in Air Combat and has since been featured in multiple subsequent Ace Combat titles.

In the Strangereal universe, the original MiG-29A was developed and adopted by various air forces as a mid-level air superiority aircraft, roughly equal to the F-16C Fighting Falcon, but was generally outfitted in secondary weapons geared towards air-to-ground missions. MIG-29As were fielded during the Belkan War by Belka and Ustio as frontline fighters, with various notable pilots using such jets in frontline operations.[1][2] One of the most notable Fulcrum units was the Belkan 13th Tactical Fighter Squadron GrauWespe, which gained fame on the western fronts before being shot down in the Battle of B7R.[3]

Fulcrums were also used by the ISAF Air Force and the Federal Erusea Air Force during the 2003 Usean Continental War.[4], with one Erusean ace pilot, Mrkos, utilizing a Fulcrum with a crimson red paint scheme.[5]

The aircraft was also fielded by the Osean Air Defense Force and Yuktobanian Air Force during the Circum-Pacific War.[6]

Fulcrums were fielded in the Lighthouse War.[7], they were operated both by the OADF, of which Champ, a member of the OADF's 444th Fighter Squadron was a notable operator, and the Erusean Air Force. Joe Barker, Callsign: Jester, was the most notable Erusean MiG-29 pilot.[8]

On June 30, 2020, at least five Estovakian Air Force MiG-29As were showcased at Redmill Air Force Base alongside foreign aircraft at a ceremony commemorating 25 years since the Belkan War's conclusion. The Estovakian military had sent these aircraft among others after being invited by the Osean Federation.[9] Later that year, during the Aurelian War, the Leasath Air Force utilized the aircraft in moderate numbers.[10]

During the Valahia Crisis, the MiG-29A followed a similar path as it did in Strangereal, with no other models being known to be in operation. It was the preferred aircraft of Faryd Gaviria prior to his desertion from Martinez Security, and was deployed in large numbers by the Valahia in their terrorism campaign.[11]

Within the Assault Horizon universe, the MiG-29A was the main small-scale fighter aircraft of the Russian Air Force, with various squadrons operating A-model units by the 2010s. Government loyalists and New Russian Federation supporters used Fulcrums during the 2015-2016 civil war in Russia, including the Molot Squadron, which accompanied the Warwolf Squadron throughout the campaign to terminate the coup by destroying the NRF leadership in Moscow.[12] The MiG-29ME export model was also developed in this world, differing only in the adoption of canards for increased mobility; several airframes were given by the Blatnoi to Nigerian anti-government troops during the 2021 civil war.[13]

In the Infinity Universe, the MiG-29A was one of the many aircraft designs acquired and manufactured by Wernher and Noah Enterprises with their Advanced Automated Aviation Plant for sale to government and private mercenary forces. During Operation Eternal Liberation, United Nations Forces made use of the craft. The USEA Federation used captures plants to manufacture their own MiG-29s, making them one of the most commonly used aircraft of the movement's aerial forces.

"A medium-sized fighter developed as a replacement for contemporary lead planes such as the MiG-21. Its excellent handling makes it a superior fighter, and it was predicted to be pitted against the F-15. Its nickname is "Lastochka", the Russian word for the swift-flying swallow."
― Hangar

"A medium-sized master fighter developed as the successor to the MiG-21. In a one-on-one dogfight, it has strong maneuvering capabilities due to its refined aerodynamics. Though it is similar in shape to the Su-27, which was developed around the same time, it was built smaller in size since it is used in close proximity to front-line bases. Its NATO codename is "Fulcrum"."
― Hangar

"TYPE: F (FIGHTER)
A medium-sized master fighter developed as the successor to the MiG-21. In a one-on-one dogfight, it has strong maneuvering capabilities due to its refined aerodynamics. Though it is similar in shape to the Su-27, which was developed around the same time, it was built smaller in size since it is used in close proximity to front-line bases. Its NATO codename is "Fulcrum"."
― Hangar 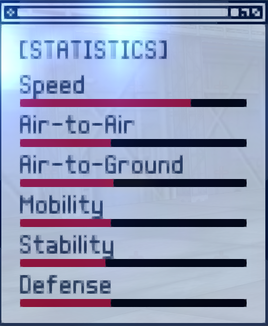 NAMED PILOTS
Frost - Found in Standoff in the Skies I. Spawns to the north if the F-2A formation is destroyed before damaging the Gleipnir.

"This fighter was developed with the goal of overpowering the enemy in one-on-one combat. The "Fulcrum" boasts powerful engines and refined aerodynamics for superb maneuverability."
― Hangar

"This fighter was developed with the goal of overpowering the enemy in one-on-one combat. The Fulcrum boasts powerful engines and refined aerodynamics for superb maneuverability and handling."
― Hangar

The aircraft is displayed as MIG-29.

EASY
Available at the start of the game