is a special version of the Mirage 2000-5 featuring the character Yayoi Takatsuki from THE iDOLM@STER. It was featured as a downloadable aircraft skin in Ace Combat 6: Fires of Liberation and Ace Combat: Assault Horizon, and was available as a standalone Special Aircraft in Ace Combat Infinity. 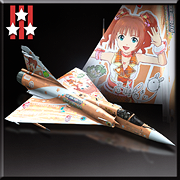 "A special version of the Mirage 2000-5 featuring the same color scheme as Yayoi Takatsuki from THE IDOLM@STER series.
It's reliable and you can depend on it to keep pushing forward in the heat of battle, but its ammo supply is a little limited just like Yayoi's financial situation."
― Hangar

Nickname
Upgrading this aircraft to Level 20 unlocked the Pla Sonic Love! nickname for use at any time.

Hangar view of monochrome version
Add a photo to this gallery

The Mirage 2000-5 -THE iDOLM@STER: Yayoi- was a downloadable iDOLM@STER-type aircraft featured in Ace Combat 6: Fires of Liberation, costing $4.99 in the XBL Marketplace. This particular Mirage 2000-5 possesses a bright orange paint scheme, adorned with the likeness of Yayoi Takatsuki, a 765 Production idol.

The Mirage 2000-5 -Yayoi- provides an extreme speed boost, while also improving air-to-ground and air-to-air performance, at the cost of lesser mobility, defense and stability. Weapons payload is also improved.

Retrieved from "https://acecombat.fandom.com/wiki/Mirage_2000-5_-YAYOI-?oldid=239858"
Community content is available under CC-BY-SA unless otherwise noted.