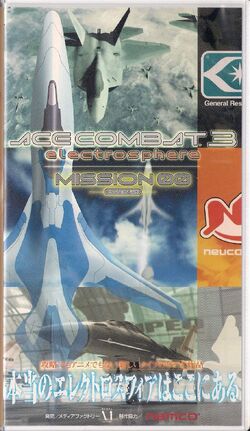 Mission 00 was a VHS tape released on June 5, 1999, one week after the Japanese release of Ace Combat 3: Electrosphere. Unlike the most probable assumption, Mission 00 is not a prologue mission or video. Rather, it introduces the viewer to Usea in Nemo's timeline.[1]

The tape starts with a 5-minute summary of the events of Air Combat and Ace Combat 2, as well as other events between Ace Combat 2 and Ace Combat 3: Electrosphere, switching to various characters who describe the state of the continent and the various organizations present in the game's conflict. Some parts of this segment are presented as news broadcasts, others as interviews, while the rest are simply characters talking to the viewer.[1]