6 minutes
Moby Dick Pursuit III is a Special Raid mission in Ace Combat Infinity, in which players must work together to destroy the special gold-painted, laser-equipped Aigaion-class heavy command cruiser. It takes place over Comona Base.

We've received intel concerning the deployment of an Aigaion class heavy command cruiser fitted with experimental armaments. Although we do not have all of the details, in addition to enhanced firepower and armor, this model is also apparently equipped with means for countering guided and optical weapons. All pilots responding to this emergency must sortie immediately and engage the target over the Alps mountain range.[1] Destroy the target before it escapes the operation area.

Similar to other Moby Dick Pursuits, the only objective in this mission is to destroy the golden Aigaion, which has increased health. However, its Nimbus missile launchers have been replaced by numerous laser units that fire lasers consistently in a sweeping pattern. They fire at all angles in all directions from the cruiser, meaning all players flying close are vulnerable to laser fire. Additionally, the lasers will shoot down all player ordnance (exactly like the MQ-90Ls), so machine guns are the best way to destroy the laser units.

Otherwise, the mission plays out the same way as Moby Dick Pursuit II. Players can engage the Gyges-class and Kottos-class aerial warships if they desire, but the units marked as mission-important are the AA units on the Aigaion. The laser units are not marked as mission-important. Once all of the AA units are destroyed, the Aigaion's numerous engines can be destroyed, and finally its cockpit followed by its core. The mission completes when the timer runs out or Aigaion's core is destroyed, whichever comes first.

In order to achieve an S Rank, as in other Online Co-Op Missions, all targets in the airspace must be destroyed, which includes both Gyges and both Kottos warships as well as all escort fighters.

Destroying Aigaion's core immediately ends the mission and awards whatever rank is earned at that point. Therefore, all players should agree to only destroy the core once all of the fighters and the other four cruisers are taken care of.

The Aigaion class heavy command cruiser equipped with experimental armaments has been stripped of its combat capabilities. While many of the aerial fleet protecting it survived, preventing the new weapon itself from joining the battle represents a significant victory.

The Aigaion class heavy command cruiser equipped with experimental armaments has been neutralized and the enemy aerial fleet that defended it has retreated while suffering significant losses. This will severely restrict enemy aerial operations in the immediate future.

The Aigaion class heavy command cruiser equipped with experimental armaments has been shot down together with the forces defending it. You've truly proven yourself in the face of such powerful counter measures. 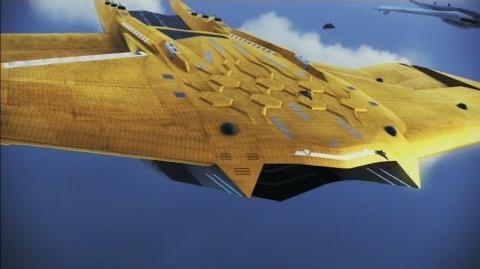 Retrieved from "https://acecombat.fandom.com/wiki/Moby_Dick_Pursuit_III?oldid=224328"
Community content is available under CC-BY-SA unless otherwise noted.