watch 04:21
Wiki Targeted (Games)
Do you like this video?
Play Sound
pencil
We've still got some work for you, too, so don't slack off now.
This article or section is a stub. You can help by expanding it.

Remaining time from previous stage
Moscow Battle (HARD) is a more challenging version of the Online Co-Op Mission Moscow Battle, featured in Ace Combat Infinity. It takes place over the city of Moscow, Russia, where players work together to destroy enemy forces that have taken over the region. A massive snowstorm is covering the area, reducing visibility for all players.

As with other HARD Online Co-Op Missions, achieving an S Rank on Moscow Battle (HARD) requires teamwork among all players. There will be difficulty in trying to earn the S rank with only 4 players unless they are highly skilled.

While the enemy has temporarily retreated from Moscow, their main forces remain very much in play. Command has decided to send the rest of our troops to the region to take back Moscow.

The worn-down USEA forces have retreated, but the guerilla tactics employed to cover their advance means the urban warfare is ongoing. Though the atmosphere in Moscow is war-weary, for now, the operation is a success.

The USEA forces deployed in Moscow have been wiped out, restoring our control of Moscow. The citizens of Moscow have welcomed us warmly as their liberators.

Your exemplary performance has wiped out the main USEA forces, leading to our successful recapture of Moscow. This defeat will force the enemy to reconsider their entire strategy in Eastern Europe.

Banner advertising a special challenge for the mission 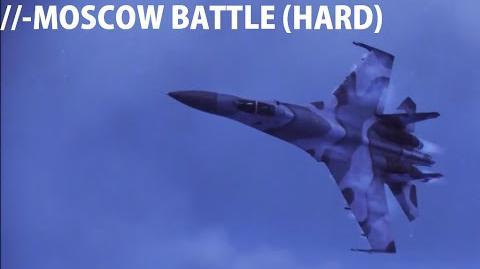 Retrieved from "https://acecombat.fandom.com/wiki/Moscow_Battle_(HARD)?oldid=204368"
Community content is available under CC-BY-SA unless otherwise noted.