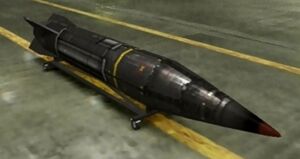 The Multi-Purpose Burst Missile (MPBM) is an experimental missile-type special weapon, featuring similar properties to a burst missile. In the Strangereal universe, it was developed by the South Belka Munitions Factory. In the Infinity universe, the developer is unknown. It was designed for the ADFX-01 and ADFX-02 Morgan aircraft.

The Multi-Purpose Burst Missile is a large missile, painted mostly black with a yellow trim and a red nose on its warhead. Its warhead is believed to be loaded with a unique and very sensitive polynitrogen compound, causing a large blast radius that can destroy clusters of enemy targets in one impact.

On the ADFX-02 model, the MPBM can be dropped from behind the aircraft or at an angle similar to countermeasures, and then remotely detonated.[1] On the ADFX-01 model, it acts as a standard missile and can lock onto a target, but will not explode unless it hits the ground or misses its target.[2] The ADFX-01 cannot remotely detonate it.

In its development in the Infinity universe, the MPBM's warhead was designed to create three explosions in the same blast radius rather than the one in Strangereal. Each of these explosions do the same damage.[3]

The Multi-Purpose Burst Missile, codenamed "Hyperthene"[4], was developed by the South Belka Munitions Factory as one of the two prototype weapons to be tested on the Morgan units. Some MPBMs were stolen with an ADFX-02 unit by A World With No Boundaries, and they were used by Larry Foulke during his duel with Cipher over the Avalon Dam.[1]

It is unknown where the Multi-Purpose Burst Missile originated from. While the design plans for the Morgan were stolen from a certain country allied with the USEA Federation[5], it is unknown if these plans included the MPBM, since only the Tactical Laser System was featured as part of the testing on the ADFX-01 -Block1-.

"A cluster missile, exploding when close to a target. It releases explosive warheads, damaging a wide area. It locks onto air or surface targets, and is particularly useful against a group of concentrated targets."
― Hangar

"A burst missile that splits apart when it gets close to the locked on target. It is capable of locking on to air-to-air and air-to-ground targets, causing a wide-area attack in the vicinity of the point of impact. It is an extremely effective guided weapon against a cluster of targets, either in the air or on the ground."
― Hangar

MPBM without its fins extended

MPBM launched and with its fins extended

"A burst missile that explodes when in close proximity to the target. Capable of inflicting damage over a wide area."
― Hangar

Retrieved from "https://acecombat.fandom.com/wiki/Multi-Purpose_Burst_Missile?oldid=257788"
Community content is available under CC-BY-SA unless otherwise noted.