"The enemy will also be going after our own fleet, so you'll need to defend as well as attack."
― AWACS Heavy Cloud 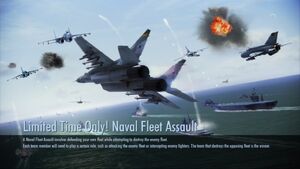 Naval Fleet Assault (sometimes referred to as Naval Team Deatmatch, Naval TDM or NTDM) is a player-versus-player gameplay mode in Ace Combat Infinity. It is only available during specific Naval Fleet Assault Ranking Tournaments, under the "Limited Time! Team Deathmatch" name in the main menu. Two teams of four players each must destroy the other team's fleet and defend theirs from destruction.

In Naval Fleet Assault, the two teams will act as escorts to a naval fleet, one for each team. The players' goal is to destroy the enemy's fleet while defending their own. On the left side of the HUD, instead of each team's score as in Online Co-Op Missions or Team Deathmatch, the total integrity of each fleet is displayed as a percentage starting at 100; this number decreases as ships are damaged or sunk. The match ends when the timer runs out or one of the fleets is completely destroyed (i.e. its integrity reaches 0).

Each fleet is led by an aircraft carrier accompanied by frigates, destroyers, Aegis ships, and battle cruisers. All ships have greatly increased health and attack capabilities compared to any other gameplay mode. All vessels in a fleet will act aggressive to any enemy aircraft that approaches them.

Battle cruisers feature the unique ability to fire numerous missiles and guns at different players. They act incredibly aggressive and players must avoid flying straight at them to avoid a volley of missiles.

In addition, Aegis ships utilize their CIWS to intercept missiles and bombs approaching any of the fleet's vessels. Multiple players can attempt to fire multiple weapons at once to overwhelm the CIWS and cause some damage. The CIWS itself can be destroyed (two systems appear on each Aegis vessel), but they will respawn after a certain amount of time. The only way to permanently eliminate their threat is to destroy the Aegis vessel itself.

"Allied NPCs will perform "Strategic Attacks" according to the number of enemy players that are shot down."
― Loading screen quote

In order to win a match, players must effectively balance the destruction of the enemy fleet and the defense of their own. It is typically recommended that half of a team should perform air-to-air defense while the other half performs air-to-ship attack. However, outside of keeping the fleet health as high as possible, players attacking enemy players can still perform damage to the enemy fleet through Strategic Attacks.

Above the friendly fleet's and below the enemy fleet's integrity bars, a series of squares and missiles are displayed. Each of these icons represents one enemy player kill; for example, when a player on the friendly team shoots down a player on the enemy team, the first blue square will be filled in. At certain kill amounts, the square is replaced by a missile, which represents a Strategic Attack. This attack will automatically initiate against the enemy fleet, and cannot be canceled or defended against.

The full list of Strategic Attacks is as follows:[1]