Northeastern Osea
The Nordlands is a nation located on the easternmost point of the Osean continent. It is bordered by FATO to the northwest, the Cascade Ocean to the northeast, the Spring Sea to the southeast, and Wielvakia to the southwest. A narrow strait separates the Nordlands from the Kingdom of Erusea on Usea's westernmost peninsula.[1] 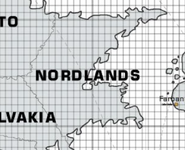 Retrieved from "https://acecombat.fandom.com/wiki/Nordlands?oldid=246462"
Community content is available under CC-BY-SA unless otherwise noted.