From Above: October 2009 was a From Above issue published in October 2009. It focused on various locations in Osea and Belka.[1] Below is a translation of the original Japanese text.[2]

Quarterly Publication "FROM ABOVE" 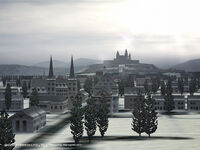 In the southwestern region of the Principality of Belka stands a castle that was built upon a hill of the old city. Construction began around the 12th century, and for around 400 years thereafter it was used as the estate of the prince-elector. Well known as a free imperial city, the beauty of the emperor's city remains to this day. 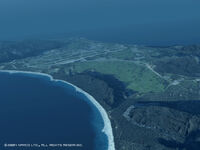 Solo Island, in the northern Ceres Ocean, is largely comprised of mountains rising from volcanic activity. The composition of the canyons is complex and labyrinthine, and the little existing flat land was converted into a military facility. However, changes to the environment caused by geological activity left no choice but to abandon the facility. Currently, the island appears to be a storage area. 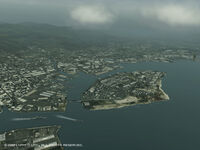 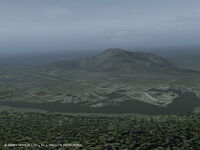 Partitioning Mount Schirm from right before the center is North Belka, but becomes Osean territory deeper in. The back of the mine has a harbor and airport. The industry surrounding the mined ore is one of the Principality of Belka's most important industries. Due to the region being affected by tundra climate, its defining trait is long winters and short summers. 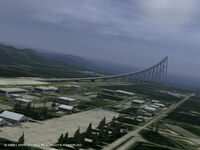 A mass driver facility established at Osea's prominent space base. Outer space development - formerly synonymous with competition between the two nations - has completely changed as a result of reconciliation between Osea and Yuktobania, and a gigantic bridge towards space was able to take shape. The lengthy catapult is sandwiched between Osea to the south and Yuktobania's prioritized development area to the north. 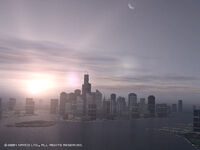 A city facing Oured Bay and located in Osea's southeastern region. It is the Osean Federation's largest city with a population of approximately 7,650,000 (as of 2009) and is composed of six administrative districts: Burton, Glennon, Stockham, Lindsey, Reinhardt, and Eversole. The Osean President's official residence "Bright Hill" is located here. 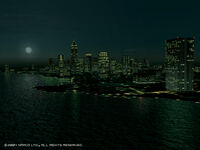 Southwest of the capital Oured is Apito City. Located in the city is an international airport centered around commercial operations that operate 24 hours a day. The night scenery of a city that looks out to the lake is befitting of a suburban airport and charms the passengers of nighttime flights. 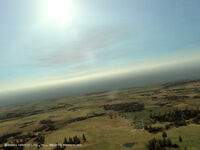 The Osean Federation's southern peninsula became a fertile granary region due to the temperate climate. The north bank has a lengthy coastline and natural disasters such as earthquakes and wind damage are comparatively low. Farms and ranches have sporadic turbines as to not obstruct farming or livestocks' land usage, as such one can spot a great amount of wind-powered generation facilities. 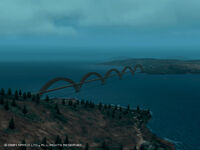 The Eaglin Strait, connecting the Ceres Ocean and Osea's Bannion inner sea. Cutting across Osea from south to north, this strait is only 2 km wide at its most narrow area and in the center of this photo is a Langer truss bridge that required five connections. Highway OS101 runs through this bridge, making it an important connection that binds north and south Osea.

Retrieved from "https://acecombat.fandom.com/wiki/October_2009?oldid=224356"
Community content is available under CC-BY-SA unless otherwise noted.