Score a certain number of points in the time limit.

Shoot down the A-10s

Operation Bunker Shot is the ninth campaign mission of Ace Combat 04: Shattered Skies. It is mainly an air-to-ground operation to support the ISAF's amphibious landing forces.

The troops are regrouped and ready to reclaim lost territory from the Eruseans in the amphibious Operation Bunker Shot. The plan requires our forces to follow an extremely narrow and vulnerable path from the landing site to the inland objective. This path allows the enemy to concentrate their fire, and provides them with a distinctive advantage. However, this route lies out of Stonehenge's effective range. Your mission is to reduce troop casualties at the beach landing sites.

In the first part of the mission, the player needs to attack the enemy defensive positions on Halle, Crowne, and Caranda beaches. The mission's score requirement depends on the player's selected difficulty:

The player must surpass the point threshold within ten minutes to advance the mission.

Six A-10A Thunderbolt II will appear and head for the central beach with fighter escort. The mission ends once the player shoots down all attacker aircraft within the seven-minute limit.

A beachhead was established through fierce fighting at each of the landing sites, but this is only the first step towards regaining the mainland. 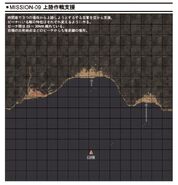 Halle Beach
Add a photo to this gallery

Retrieved from "https://acecombat.fandom.com/wiki/Operation_Bunker_Shot_(AC04)?oldid=259677"
Community content is available under CC-BY-SA unless otherwise noted.