is a Special Aircraft based on the P-38 Lightning flown by Richard Bong, an American ace from World War II. 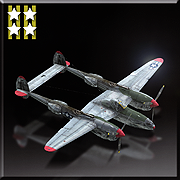 "A special version of the P-38 based on the one flown by an ace pilot during the last great war.
Boasting exceptional defensive capabilities, it can pressure the enemy without worrying about taking minor damage along the way.
So tough it could be considered the embodiment of the original pilot's uncompromising soul that will take on any battle head-on."
― Hangar

This aircraft was only available to the top 3,000 participants in the "Piston Aircraft Battle" Online Co-Op Missions Ranking Tournament in October 2015.

Nickname
Upgrading this aircraft to Level 20 unlocked the Devoted Husband nickname for use at any time.

Retrieved from "https://acecombat.fandom.com/wiki/P-38L_-Flying_Aces-?oldid=224412"
Community content is available under CC-BY-SA unless otherwise noted.