The polar bears are an easter egg within Ace Combat 5: The Unsung War. Their existence was revealed during a developer interview published after the game's release, which led to a concentrated effort on internet forums to locate them. Eventually, a player sent a letter to Project Aces and got a reply, which led to their discovery.

The polar bears are spread out over at least eight locations in the Razgriz Straits. Due to the mission parameters of Demons of Razgriz, it is easiest to locate them while in Free Flight mode. They are displayed as one large polar bear (believed to be a mother) and two smaller polar bears (believed to be her cubs).

Due to their size, it is impossible to see them from high altitudes or fast speed, and the player must fly slowly and below at most 50 feet. Using an aircraft such as the A-10A Thunderbolt II or YA-10B would be advisable since they are naturally slow aircraft.

"How could you find them? To tell the truth, there are parent and child polar bears in a certain stage. Not only polar bears but also a monster from Pacman series, cars from Ridge Racer and so on are drawn on the grounds, which are customary to the [Ace Combat] series, so we hid such amusing things in several stages and we believe that we made the game full of such gimmicks and scenes that can amuse people even when they are simply flying. So we'd rather that they would make the best out of Free Flight."
― Masato Kanno[1]

The polar bears' existence was announced during a 2004 interview with the developers (previously published in Ace Combat 5: The Unsung War Perfect Guide[2]), in which Masato Kanno, a member of Project Aces, revealed that they had hidden many easter eggs within the levels such as polar bears, Ridge Racer cars, and Pac-Man ghosts. The main goal of these easter eggs was to promote Free Flight, a gameplay mode new to the PlayStation 2 Ace Combat games that allows players to fly freely in the different mission areas.[1]

Following this reveal, many fans on Japanese and English community forums began hunting for the bears, which were supposedly a mother and cub. It was quickly assumed that the most likely mission they would appear in would be Demons of Razgriz, since polar bears are typically found in arctic climates. However, it was incorrectly assumed that the polar bears' appearance was similar to the Pac-Man ghosts in Desert Arrow, which are large and clearly visible from thousands of feet in the air. With this assumption, it was believed that a group of rocks visible from high altitude was the polar bears, but not many people were completely convinced this was the case.[2]

A user on GameFAQs with the username "yellow26" had been prominently associated with hunting the bears. His best guess as to their location was a collection of rocks and snow in Ancient Walls that very slightly resembled a polar bear laying down.[2] By January 2007, he had determined that someone should directly contact Project Aces concerning the polar bears, and did so himself on January 17. Surprisingly, on January 24th, he received a reply from Masato Kanno which provided all of the necessary information that led to their quick discovery, including that they are indeed in the Razgriz Straits, are 3D rendered, and are very small and difficult to spot even when flying at low altitude.[3]

The letter from Kanno also led to the quick discovery of the snowman in Ice Cage and White Noise.[3]

Below is a translated summary of Masato Kanno's letter, as provided by yellow26.[3]

Thank you very much for your letter! It was quite curious and thus caught our attention. It is an honor for us developers to know that people are enjoying the game in many ways even now. It is also an encouragement for us to know that players are associated with each other "beyond national boundaries." Thank you once again on behalf of PROJECT ACES.

Well, let's not rush into the answer. I sure would not want to make a killjoy out of me for those who have devoted themselves to searching the Bears and those who will start searching them as of now. Please consider the following clues to be our answer.

The Mother and Cub Bears were placed as an experiment. In the early stage of the development, there was a question: Is it possible to visually confirm an object in the size of a real life human being in Ace Combat 5? In order to verify the quality of AC5's graphic level, these bears were introduced into the game. That players have been reportedly unable to see them is nice feedback to us. Your voice was heard!

There are Pacman, Ghost and even a snowman object (!) in the world of Ace Combat 5. We would like you to fly more and enjoy seeing them all. Please keep your eyes open to PROJECT ACES. Thank you!

The original, full letter in Japanese was never posted.[3] 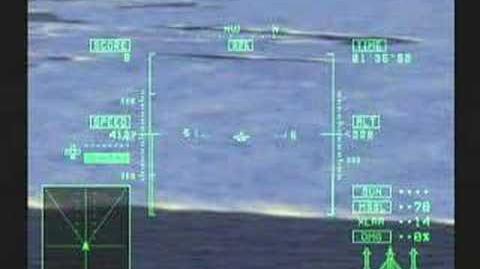 Retrieved from "https://acecombat.fandom.com/wiki/Polar_bears?oldid=261405"
Community content is available under CC-BY-SA unless otherwise noted.