is an Ace Combat Infinity Special Aircraft variant of the R-101 Delphinus #1. It features a livery based on Neucom's original skin for the R-101, as well as overall increased statistics over the standard R-101 in Infinity. 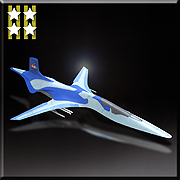 "A special version of the R-101 which has received full support from its maker, Neucom Incorporated. It features improved maneuverability and stability as a result of the use of highly reliable parts and the fine adjustments made by special engineers. Neucom Incorporated revealed information on some of the parts used by its internal flight squadrons, a move questioned by many in the general public. The company has claimed that they released the information with the goal of recruiting new staff.

*The in-game screen display for this aircraft is based on the design of "ACE COMBAT 3.""
― Hangar

Like other Ace Combat 3 aircraft, when flying the R-101 -Neucom-, the player's HUD will look similar to that from Ace Combat 3: Electrosphere in all three camera views. The sound effects for locking on and firing a missile are replaced by those from Ace Combat 3 (the standard high-pitched tone for standard missile lock, and a lower-pitch tone for special weapon lock). The "Destroyed" display is also replaced by "Bingo" or "Bulls Eye", complete with the female voice-acted line from Ace Combat 3 for each. In addition, during Mission Updates, the preview image at the top-right will slide into and out of view instead of popping in and out on the standard HUD.

Nickname
Upgrading this aircraft to Level 20 unlocked the Flag Holder of the New Generation nickname for use at any time.

Banner advertising the aircraft and the F-15E Event Skin #02

Retrieved from "https://acecombat.fandom.com/wiki/R-101_-Neucom-?oldid=217921"
Community content is available under CC-BY-SA unless otherwise noted.