Ace Combat 3: Electrosphere
The R-352 Sepia is a spacecraft developed by Neucom Incorporated. It's the first star fighter in Strangereal.

The R-352 was developed sometime before the Intercorporate War. It was planned to be used against General Resource's Orbital Satellite Laser after its discovery by the R-808 Phoca. Depending on the choices of Nemo, he would either attempt to destroy the R-352 as it launched from Comona Islands, or pilot the craft itself and engage the satellites in outer space.[1][2]

"A shuttle developed for anti-satellite duties in outer space operations. It is generally classified as a stratosphere insertion rocket. It has many devices to allow for the rapid control of the aircraft in space, where it is not affected by gravity. Much of the interior is dedicated to propellant used for maneuvering in space, and it boasts outstanding mobility for a spacecraft."
― Ace Combat 3: Electrosphere - Namco Official Guide Book

The R-352 Sepia is only available during the mission Zero Gravity in both the Japanese and Export versions of the game. 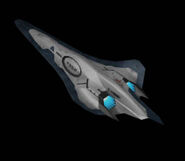 Retrieved from "https://acecombat.fandom.com/wiki/R-352_Sepia?oldid=251074"
Community content is available under CC-BY-SA unless otherwise noted.