is a Special Aircraft variant of the Rafale M based on the airframe from Cocoon Squadron, one of the enemy squadrons featured in Ace Combat: Assault Horizon Legacy, specifically flown by squadron leader Camilla Almeida. 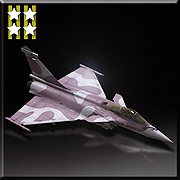 "A special version of the Rafale M based on the first aircraft from "Cocoon Squadron," a fighter squadron that fought during an internal United Nations conflict. Striking a different impression from the known pilot, the aircraft itself has no standout features, but is balanced to a high level and tuned to be able to fly well alongside all allied aircraft. The original pilot was a true heroine and was shown the utmost respect from veteran ship-board pilots. Even after losing her carrier she retained her will to fight, using a skillful combination of attacks to cause considerable trouble for the Special Tactical Fighter Squadron."
― Hangar

The aircraft is available during a Limited-Time Drop for November 2015.

Nickname
Upgrading this aircraft to Level 20 unlocked the Queen nickname for use at any time.

Banner advertising the aircraft and the FB-22 Event Skin #01

Retrieved from "https://acecombat.fandom.com/wiki/Rafale_M_-Cocoon-?oldid=257033"
Community content is available under CC-BY-SA unless otherwise noted.