is a special version of the Rafale M featuring the character Iori Minase from THE iDOLM@STER. It was featured as a downloadable aircraft skin in Ace Combat 6: Fires of Liberation, and was available as a standalone Special Aircraft in Ace Combat Infinity. 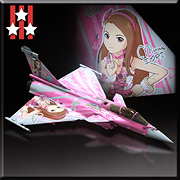 "A special version of the Rafale featuring the same color scheme as Iori Minase from THE IDOLM@STER series.
It features unique flight characteristics which make it difficult to control, but in the hands of a skilled pilot, it's unstoppable and can adapt to the most dangerous of situations."
― Hangar

Retrieved from "https://acecombat.fandom.com/wiki/Rafale_M_-IORI-?oldid=147923"
Community content is available under CC-BY-SA unless otherwise noted.