View source
watch 02:23
Wiki Targeted (Games)
Do you like this video?
Play Sound

is a Special Aircraft variant of the Rafale M featuring the livery of Mobius 7 of Mobius Squadron. It was available in Ace Combat Infinity as a Ranking Tournament reward. 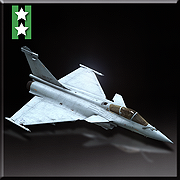 "An Rafale M special aircraft based on the seventh aircraft from the 118th Tactical Fighter Wing "Mobius Squadron".
It mainly features enhanced weapons capacity and durability, and was never shot down in a single attack, allowing it to power through numerous situations.
It participated in the final battle alongside the first aircraft. While it did not leave any exceptional results, it used its wide range of weapons to restrict enemy movements and made a significant contribution to helping allies come back alive."
― Hangar

Nickname
Upgrading this aircraft to Level 20 unlocked the Nice Assistor nickname for use at any time.

Community content is available under CC-BY-SA unless otherwise noted.