is a Special Aircraft variant of the Rafale M featuring the livery of Mobius 8 of Mobius Squadron. It was available in Ace Combat Infinity as a Ranking Tournament reward. 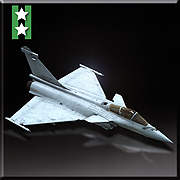 "An Rafale M special aircraft based on the eighth aircraft from the 118th Tactical Fighter Wing "Mobius Squadron".
It has been tuned with a focus on durability.
The pilot of the original aircraft was shot down numerous times during the long conflict, but the pilot was said to have always managed to come back alive. During the final mission, the pilot flew in a new Rafale M as a replacement for the F-15E lost in the previous battle."
― Hangar

Nickname
Upgrading this aircraft to Level 20 unlocked the Stormy Life Walker nickname for use at any time.

Retrieved from "https://acecombat.fandom.com/wiki/Rafale_M_-Mobius8-?oldid=224449"
Community content is available under CC-BY-SA unless otherwise noted.