is a modified version of the Rafale M featuring a Pisces theme. It only appears in Ace Combat Infinity as a Special Aircraft. 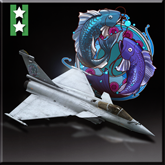 "A special version of the Rafale M featuring a Pisces theme.
Speed performance has been improved enabling it to escape and pursue enemies with ease.
Like a fish that has escaped its predator, this aircraft sours through the skies with its wingmen connected via datalink."
― Hangar

Nickname
Upgrading this aircraft to Level 20 unlocked the Emergency Evasive Flight nickname for use at any time.

Retrieved from "https://acecombat.fandom.com/wiki/Rafale_M_-Pisces-?oldid=224450"
Community content is available under CC-BY-SA unless otherwise noted.