is a Special Aircraft variant of the Rafale M with a special skin featuring a blue archangel theme. 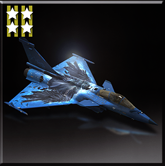 "A special version of the Rafale M featuring a painting of a majestic angel. Adjustments have been made focusing on maneuverability which has resulted in improved air-to-air combat abilities. It's name meaning "Angel's Wind", is not representative of the destructive firepower that it can rain down on its enemies."
― Hangar

The aircraft was available during a Limited-Time Drop event in August 2014.
The aircraft became available from February 1, 2015 to March 30, 2015 in the Special Supply Items Catalogue for 400 Tickets.

Nickname
Upgrading this aircraft to Level 20 unlocked the Marine Blue Angel nickname for use at any time.

Top view focusing on the artwork 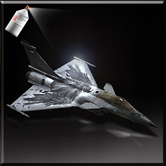 Retrieved from "https://acecombat.fandom.com/wiki/Rafale_M_-Vent_d%27Ange-?oldid=216298"
Community content is available under CC-BY-SA unless otherwise noted.